Visit site
In a world where most motorcycles are larger, heavier machines, you will sometimes see a fully grown adult rider on something that looks comparatively tiny in size. It doesn’t look like a scooter, it sounds like a motorcycle, and it has some serious get up and go. You might look at it scratching your head, wondering what the heck that tiny little thing was. More likely than not, you just witnessed a Honda miniMOTO.

There is significant history to the miniMOTO models, as the very first motorcycle that Honda mass produced, and the literal liberator of most of Asia, was the miniature Honda Super Cub. Branching off from the success of the Super Cub, Honda also made things like the Honda 50 minibike, an absolutely pocket sized bike with thick wheels to handle being ridden on dirt roads and around farms, as well as the Z50A, a “civilized” minibike for use in the city that was larger than the Honda 50 but still smaller than the Super Cub.

Today, Honda still continues to produce three to four styles of miniMOTOs, depending on where in the world you live and the road regulations regarding motorbikes there. Because of that variation, today we will look at the three most common models sold worldwide.

The Honda GROM & Why It’s the Perfect Small Bike​ 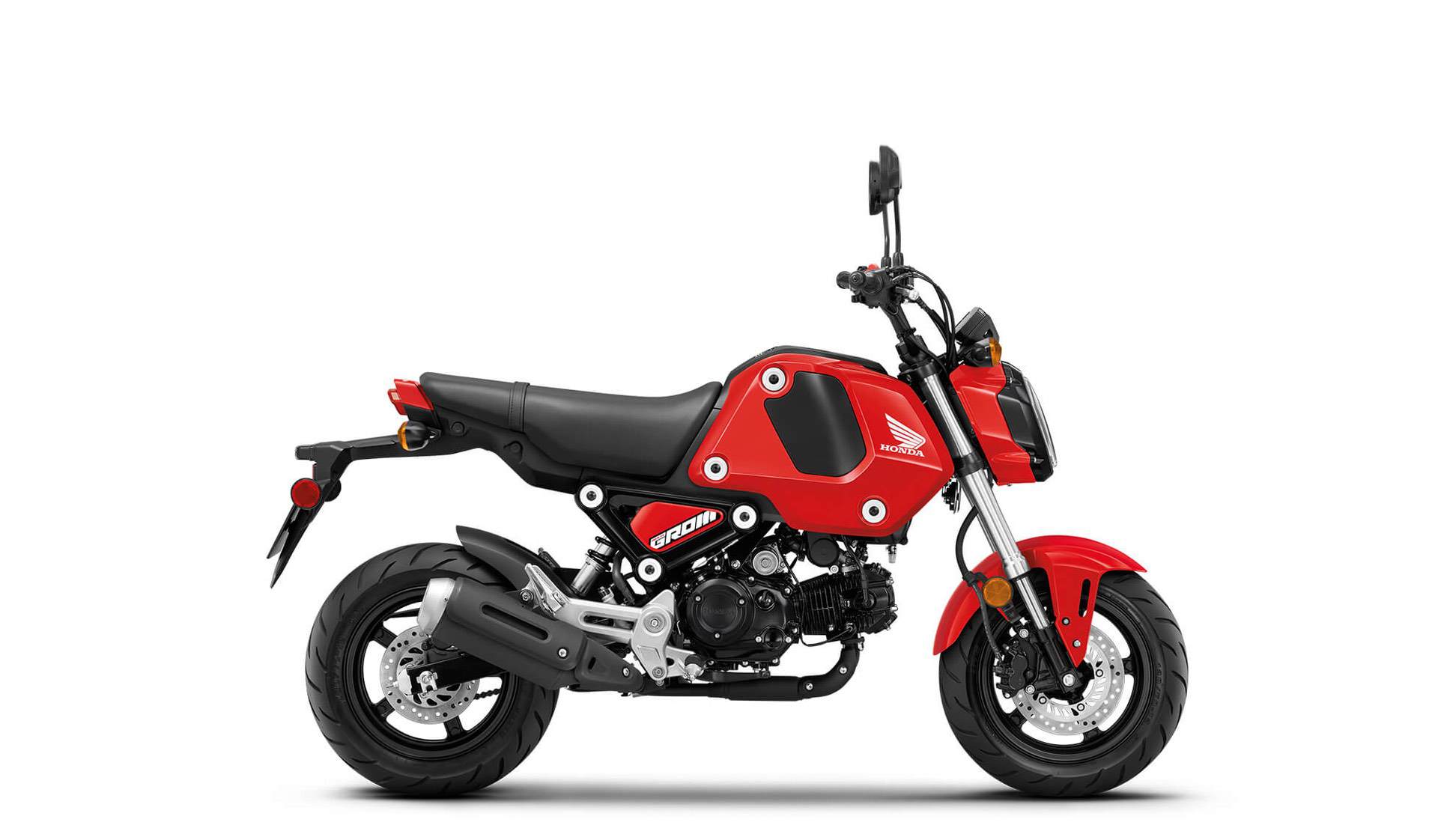 Almost everyone in the motorcycling community knows about, has heard of, or at least seen mention of the Honda GROM, or what is known as the MSX125 in Europe and some other parts of the world. With a wheelbase of just 47.2 inches (1,200 mm), a seat height of just under 30 inches (750 mm), and a tiny 125cc four-stroke single thumping away, this is one seriously small bike. Yet, it is also by far the most popular of all the small bikes available from Honda, or any manufacturer for that matter. Why is that?

One reason is that the GROM is incredibly easy to ride. Because of its small size but chunky power, with that tiny engine producing 10 HP and 7.7 lbs-ft of torque, it can accelerate quite rapidly, but not so much that you’ll loop the bike or be the star of a YouTube video where you crash it on the first ride. The short wheelbase and light weight, as it is 230 lbs soaking wet with a cinder block tied down to the seat, also makes it exceptionally agile, able to weave through a slalom better than some supersports can.

That is not to say, however, that it is a sportbike. While it is a miniMOTO, if you had to make a comparison to a “full size” bike, the GROM is a naked. No windscreen, no fairings, just two wheels, a seat, some handlebars, and a very happy, peppy engine ready to rock.

That said, the GROM is the perfect small bike because it can be a jack of all trades.

For some people, it is their first bike, and it will fit any rider from short to tall, wide to thin, without complaint. For others, it is a great little city or town runabout. Need to go down to the grocery store to get some milk? Grab a backpack, your riding jacket, gloves, helmet, and take the GROM. You’ll grin the whole way there and back. 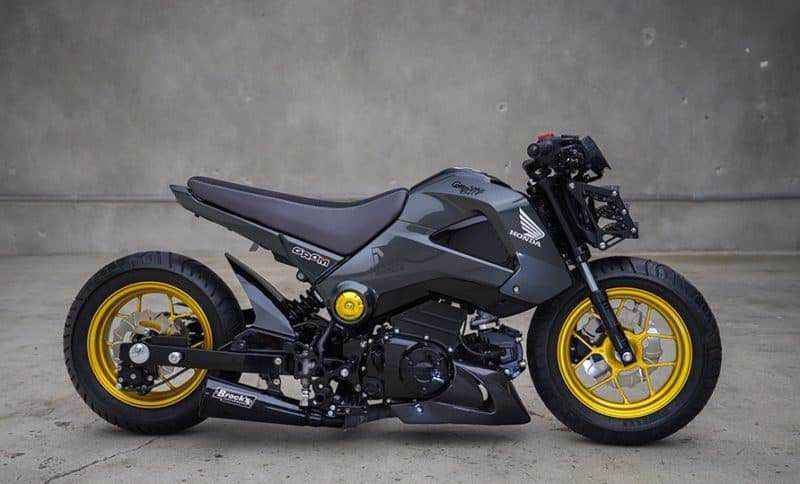 The 2015 Mad Industries Honda GROM Extended SF (StreetFighter) is an example of just how far you can push a GROM project when you want to. Image Via: Mad Industries

For even more people, a GROM is their project bike, as it is very inexpensive at $3,399—and because so many of them are out there, there is a simply massive third-party modifications and upgrade market out there. For example, Akrapovic, famous for their fully titanium exhaust and with contracts with many superbike and supercar manufacturers, has a full line of titanium and titanium/carbon fiber exhausts and headers for the GROM.

In Europe and the UK especially, the GROM is popular because it falls under the A1 (UK) or M1/B1/Q1/other level 1 licenses (EU) license category, which limits bikes to 125cc and no more than 11 kW (14.75 HP). It also tops out at just about 70 MPH if you’re headed down a steep hill with the wind at your back, so while it can get moving pretty quickly, it is ultimately designed to happily do the runabout business at 30 to 50 MPH—speeds 90% of UK and EU roads have as their limits.

The Trail 125: A Miniature ADV, The Smallest on the Market Today​ 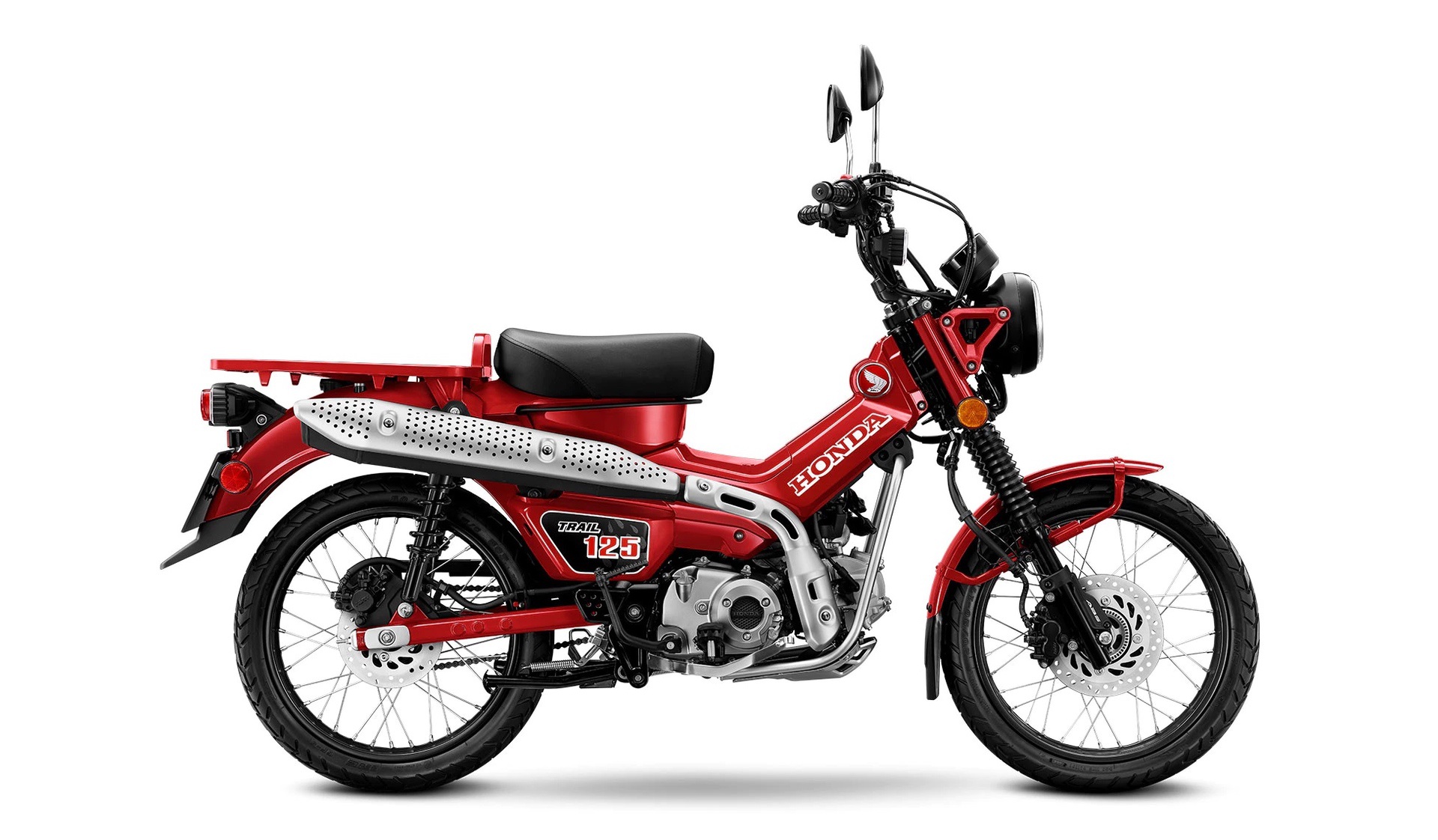 Honda is well known for their ADV and off-road bikes. In fact, while the ADV segment was started by BMW, it was Honda’s original Africa Twin near the end of the 1980s that helped propel the segment from a niche to a mainstay of the motorcycle world. Today, it is almost required for a manufacturer to have an ADV bike if they want to be taken seriously on a global scale. Honda still makes the Africa Twin, and it’s only grown in popularity.

In the 1960s and 1970s, Honda noticed that a lot of the places where people were buying the Super Cub did not have paved roads, only packed dirt roads or simple foot trails to get in and out of their villages and towns. While the Cub was able to handle the terrain, a new model was brought in specifically for these markets, the Super Cub Trail. Over time, that name was abbreviated to simply CT, which in a one-off aspect for Honda denoted not a model series, but a grouping of related bikes all intended for off-road and trail riding use.

While the bikes were well loved the world over, including in the US, the last time the bike was sold in North America was in 1986. However, as Honda’s newer, bigger ADV bikes sold well and gained traction in the market, the idea of bringing the venerable Trail name back to American shores was seriously considered.

The discussions began: Was it to be another Super Cub-based bike? What kind of engine and equipment would it have? Will riders be only going on packed dirt trails or truly off-road? 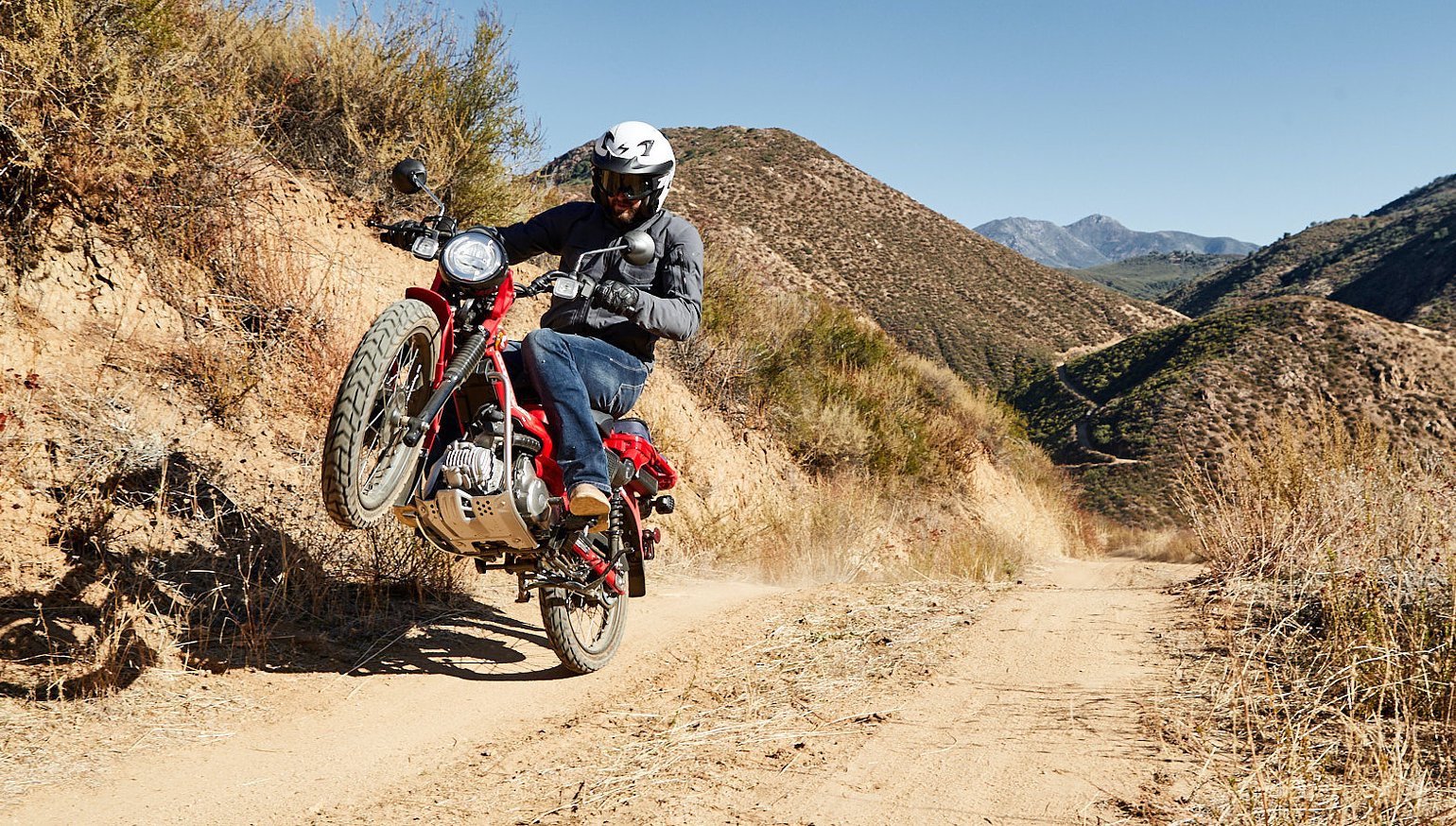 Who said being a tiny bike off-road had to be boring? A nice shot from RevZilla’s review of the Trail 125, showing the included bash plate and just how nimble the miniMOTO really is. Image Via: RevZilla

The result of all those discussions is the Trail 125 ABS, a compact, fully sprung, skid plate bearing miniADV that is just as capable as its much larger brethren. What makes this bike particularly good is that it is built upon the running gear and engine from the GROM, meaning that it has the same four-stroke, fuel-injected 125cc engine pumping out 10 HP and 7.7 lbs-ft of torque.

As with the GROM, that may not sound like much. But even with a full load on the rear cargo shelf, this little bike will still attack a dirt road or packed trail with the same eagerness its sportier brother displays.

What makes the Trail 125 stand out in the ADV field, however, is that it is so tiny. With a wheelbase of 49 inches and weighing 260 lbs, this is an ADV that can truly go on any trail, and even across wooden bridges or through shallow backcountry streams without putting much stress on the bridge or sinking into the rocky bottom of the stream as much.

As it is also fuel injected instead of carbureted like its CT predecessors, it absolutely sips fuel. As long as you have a 2 gallon jerry can or fuel bladder with you, you can realistically spend an entire weekend off-road, camping under the stars and enjoying the outdoors with a bike you can fix with a rock and a few choice curse words if anything goes wrong. 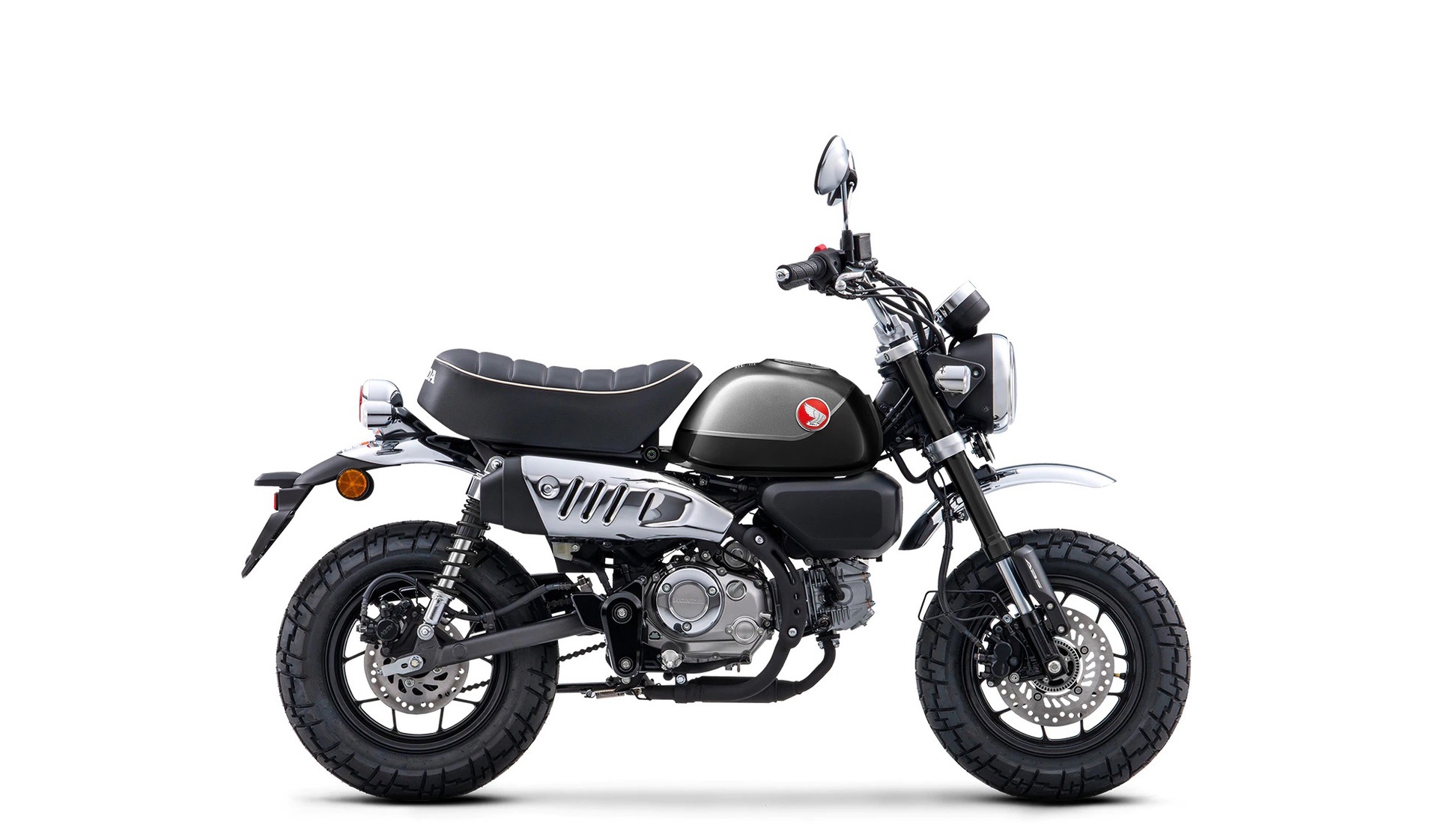 Honda’s Monkey series of motorcycles have been a constant in their lineup for just over 60 years now, and there is no sign that they are slowing down production. The original miniMOTO was one of the first bikes that was not an offshoot of the Super Cub, instead being its own original model. It was called the Z-series at first, but because it was so monumentally tiny, it quickly gained the nickname “Monkey” as most people riding it looked like a large monkey or ape riding a tiny little pocket bike.

When a marketing opportunity like that presents itself, you don’t need to think twice before embracing it, and as such, just a few years into its life, the Z-series became the Monkey. One important fact to keep in mind, however, is that the Z-series version of the Monkey, and the current Monkey 125, are actually not in the same model group. To explain the difference, the easiest way to delineate the two is via their engines. 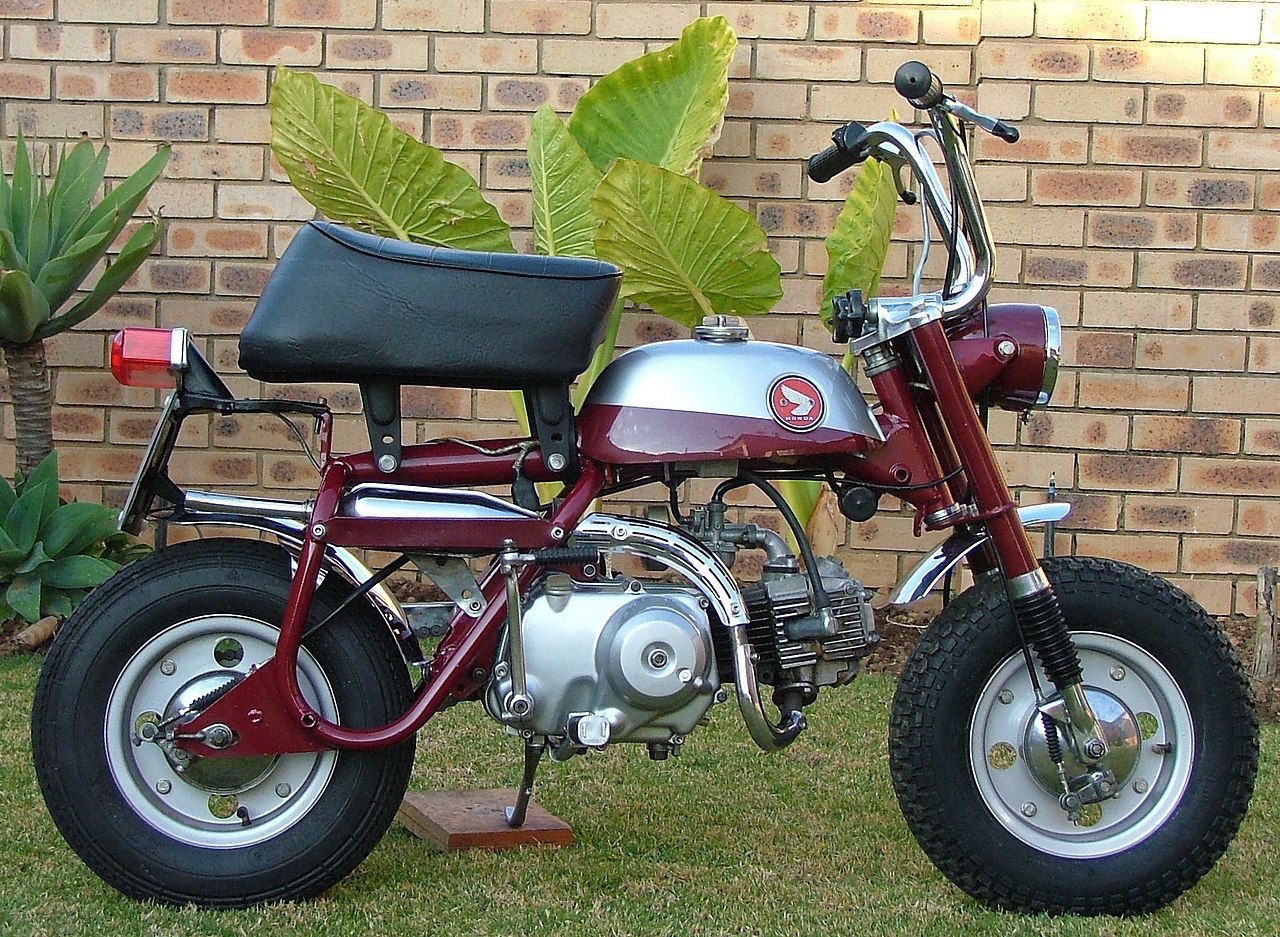 An original Honda Z50A-K1 Monkey from 1971. Image Via: Wikimedia Commons.

The original Z-Monkey was also known as the Z100 in 1961, despite the common practice of the time of the name of a bike including the engine size. This was because the Z-Monkey, from 1961 all the way to its discontinuation in Japan in 2017, sported a 50cc four-stroke single that put out 4.5 HP.

This engine was so tiny, in fact, that both it and the fuel tank sat partially under the seat, which itself was only 22 inches off the ground. When the first version of the Monkey was sent worldwide, it was renamed to the Z50, and as incremental updates and upgrades arrived, such as suspension, electronic fuel injection, and the like, letters were appended to the end.

The most prevalent of those Z50 Monkeys in the USA were the Z50A and the Z50R, which were both the first import models and the last import models when Honda announced the Z-Monkey’s discontinuation in North America in 1999. 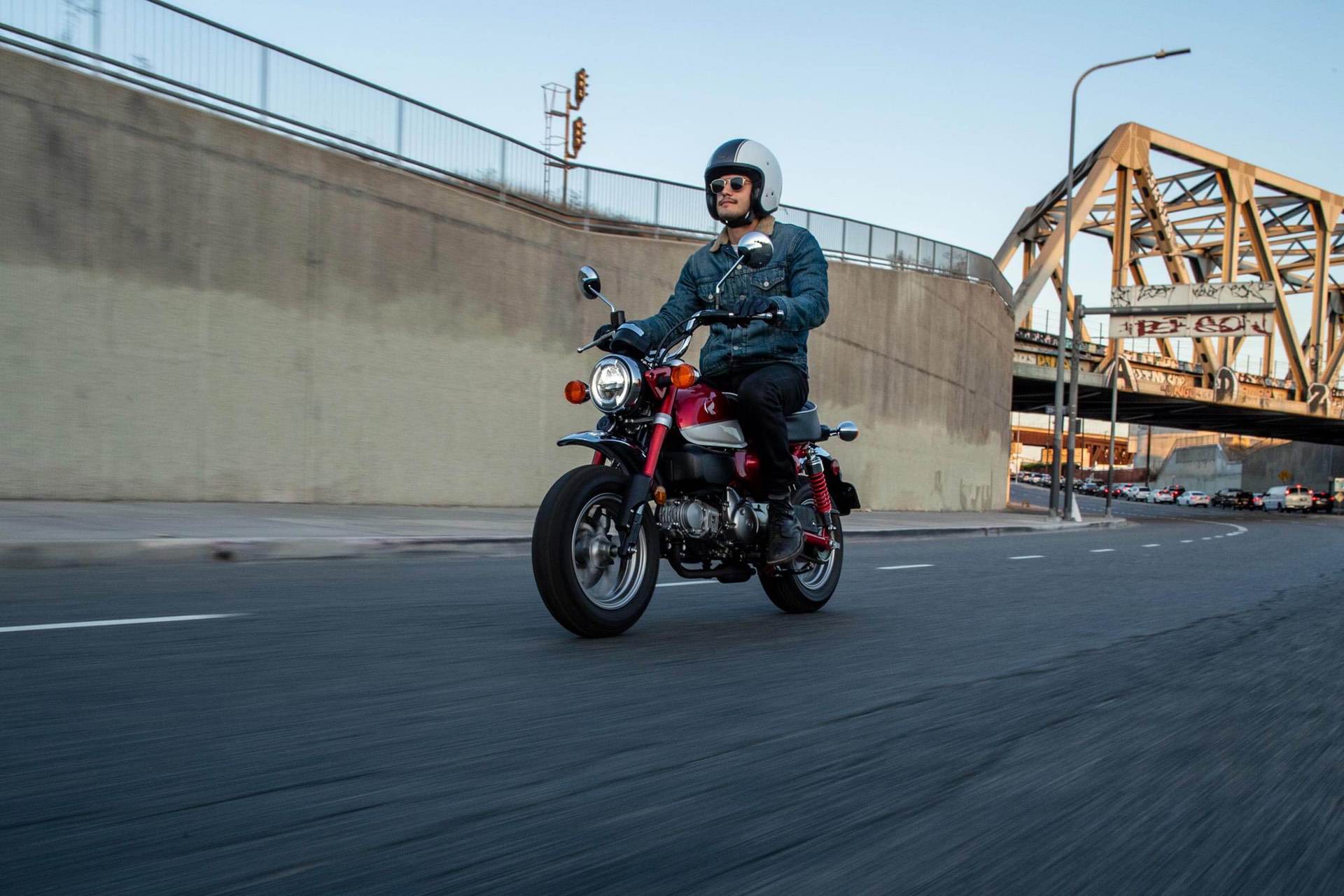 A tiny bike, but serious enough to be the perfect neo-retro city runabout. Image Via: Honda USA

As well, the Monkey 125 is a manual 5-speed with a wet multiplate clutch, in comparison to the centrifugal 3-speed semi-automatic transmission of the Z50 models. The fuel tank also has more of a retro shape, and the bike does qualify as a naked since it barely has any fairings whatsoever. However, it still exudes the classic style of its original design, without letting too much of its GROM blood show.

Because of this, the Monkey 125 is by far the safer, more rideable bike, with disc brakes front and rear with full ABS, PGM-FI fuel injection that is constantly adjusted via the onboard computer, and sports-style inverted front fork suspension. This all makes it agile, and add in that the whole bike, wet, ready to ride is only 231 lbs— it might even be able to be called “nippy.”

Much like the GROM, this is definitely not a freeway cruiser, and it might even struggle to reach freeway speeds if there is a headwind, but as a retro-styled city runabout or just a weekend fun ride machine, like the other two miniMOTOs, it’s almost guaranteed to plaster a smile on your face.

Visit site
I still fancy a ride on one of those trail 125's. Wish they would bring them in here.
You must log in or register to reply here.

The 2023 Honda Motorcycle Lineup + Our Take on Each Model