The Best Naked Motorcycles of 2020

Visit site
Strip Them Down​

Naked motorcycles. Sounds sexy right? Well, in most cases, that’s true. These bikes are stripped of their fairings and ready to ride. They offer a more of a wind-in-your-face, raw experience. In my mind, it’s the way motorcycles are meant to be experienced.

Naked bikes come in many different forms. Often, the design is a fully-faired sportbike that has been stripped down, reworked, and made a little more street-friendly. You’ll find single piece handlebars instead of clip-on’s, a more upright riding position, retuned engines, and usually higher gearing.

All told, these are the thrill machines you should buy if you’re interested in a sporty but still street-focused experience and don’t mind getting blasted with the wind while you do it. There are been many good naked motorcycles built this year, and it’s tough to find the ones that are the best.

With that said, I did my best. These are my picks. I looked at everything from styling to price to performance. There might be a bike or two that you point to that I left off, but just know that I considered it, and I believe these are the best options. 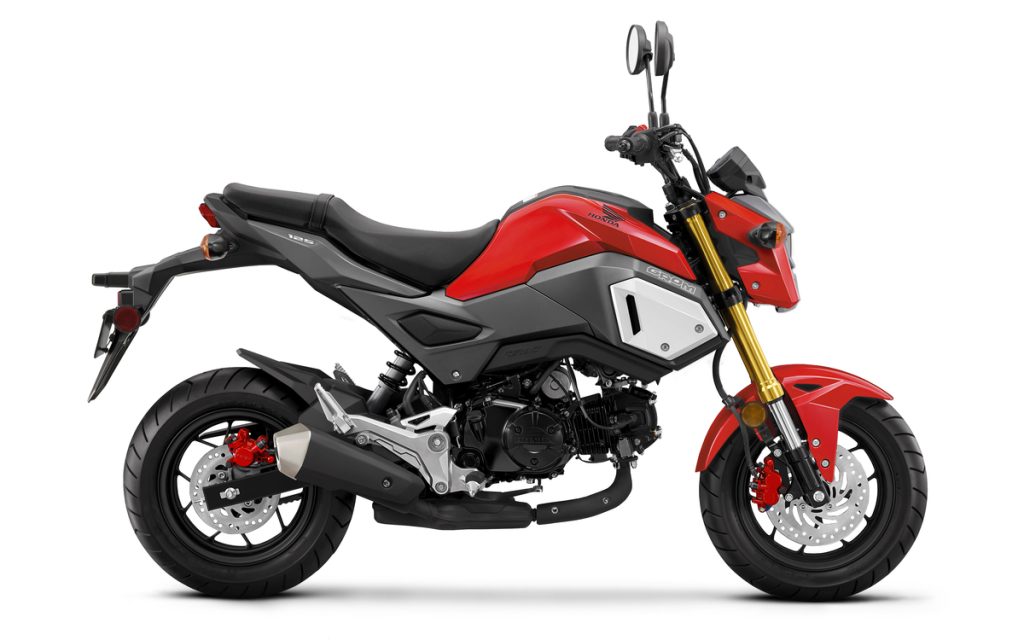 Honda has some great naked bikes, and it might surprise you to hear this, but my favorite is the Grom. Honda’s Grom is a badass little motorcycle that is more fun than the vast majority of other motorcycles out there. It punches well above its weight and is one of the most enjoyable bikes of its class.

The Grom isn’t a complicated machine. The bike features a 124.9cc air-cooled, single-cylinder, four-stroke engine that makes about 10 hp. The engine is mated to a four-speed transmission, and the bike is perhaps the most fun thing in the world to whip around and pop wheelies on. 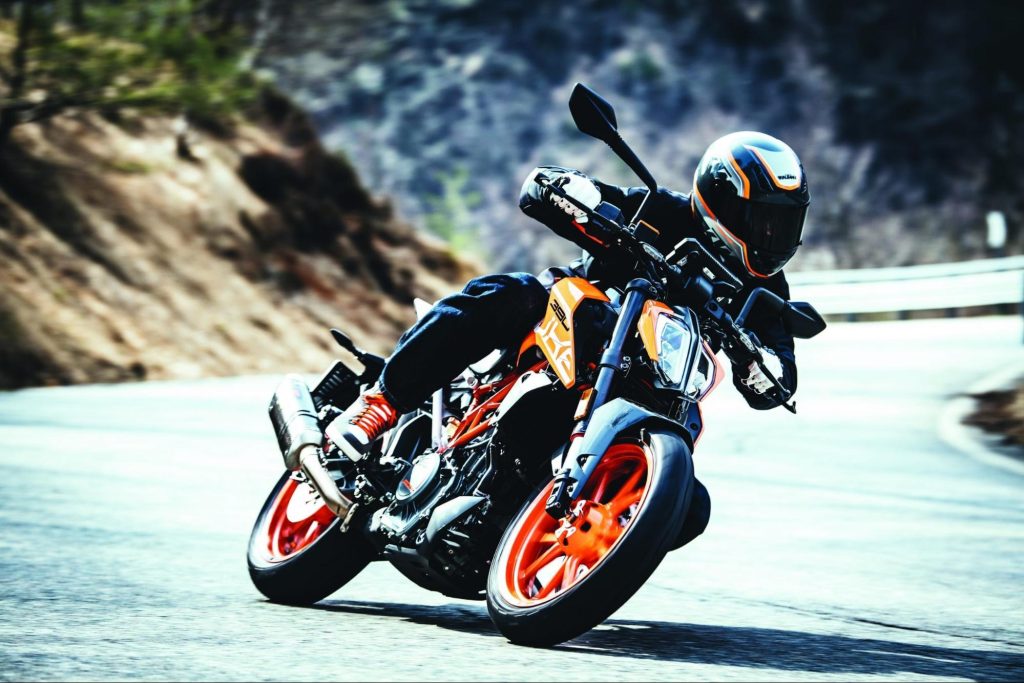 So, KTM makes a lot of fantastic naked bikes and the 390 Duke is one of them. I have a lot of KTM bikes on here, and well, the company really hits the naked market with all the right moves. The 390 Duke is a good example. It’s sharp and quick, and it will reward you when you ride the bike well.

The motorcycle features a 373cc single-cylinder four-stroke engine that mates to a six-speed transmission. The engine makes about 43 hp, and the bike is ready for any twisty road or a concrete jungle. 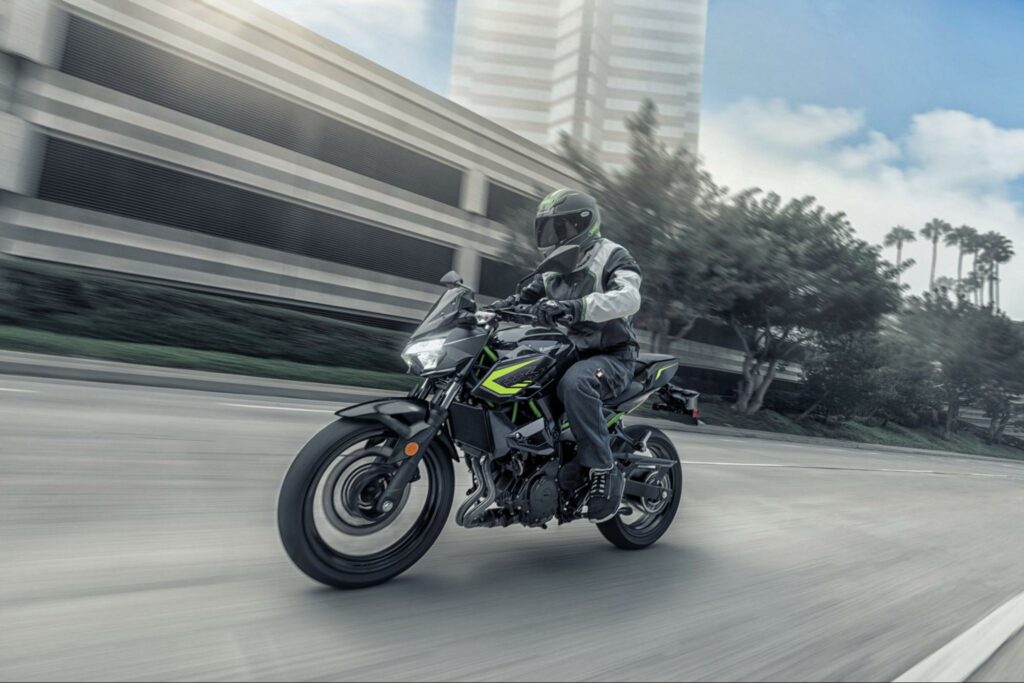 A fantastic motorcycle for beginners and for intermediate riders, the Z400 is a naked bike that plenty of people find immensely satisfying. The motorcycle is based on the Ninja 400, which is regarded as one of the best motorcycles of its size.

The bike features a 399cc Liquid-cooled, four-stroke parallel-twin engine that connects up to a six-speed transmission. The engine makes 49 hp. While not the most extreme Kawasaki out there, the bike is a fantastic handling machine and quick enough to be some fun in just about every scenario you’ll find yourself on the street. 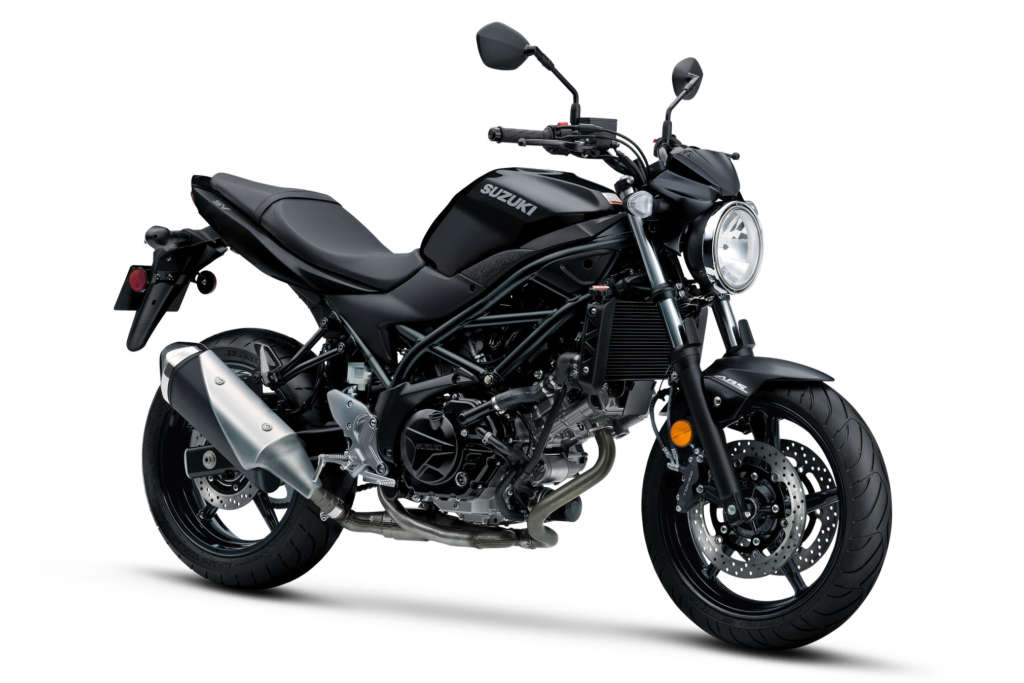 Some of you out there may balk at this one, but the Suzuki SV650 is no joke. The bike is well-loved by everyone from beginners to legit track-day heroes. The motorcycle is well-loved for its easy customizability, it’s excellent handling characteristics, and it’s a good engine. It’s not the most advanced motorcycle out there, but that doesn’t mean it’s not darn good.

The regular SV650 gets a 645cc four-stroke, liquid-cooled, DOHC, 90-degree V-twin engine that mates to a six-speed transmission. Suzuki sells a few different versions of this venerable motorcycle, and they’re all just really nice machines.

Let me put this out there right now. All of the Yamaha Hyper Naked bikes are darn good. They all deserve some recognition. The MT-07 just happens to be the bike that I think is the best one. The motorcycle has enough power to do just about everything you’ll need it to and it handles twisty roads with ease.

The MT-07 features a 689cc liquid-cooled DOHC four-stroke engine with a six-speed transmission. The engine makes 74 hp and is a great option for riders of various skill levels. It’s a naked motorcycle that is ready for any kind of street duty from regular commuting to highway rides to twisty canyon road. 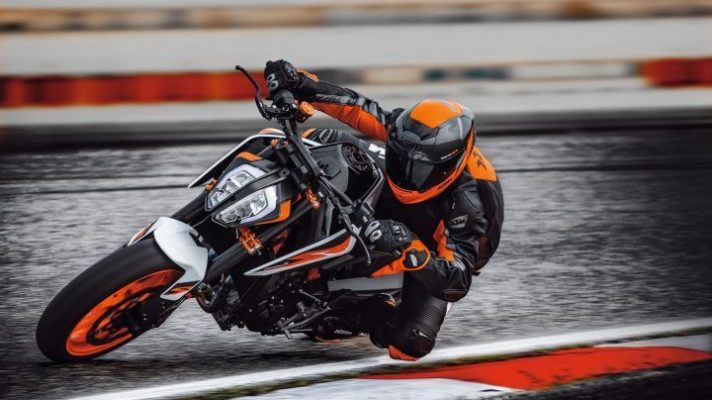 The Duke 890 R is a model that is a pretty extreme middleweight machine. It borders on fitting into the next category. However, the Duke 890 R does fit here. It’s one of the most extreme models at this level of bike.

The motorcycle features an 889cc DOHC parallel-twin engine that’s liquid-cooled that makes 120 hp and 73 lb-ft of torque. The bike also gets some WP Suspension components that help make this bike one of the sportier and agile bikes on the market today. 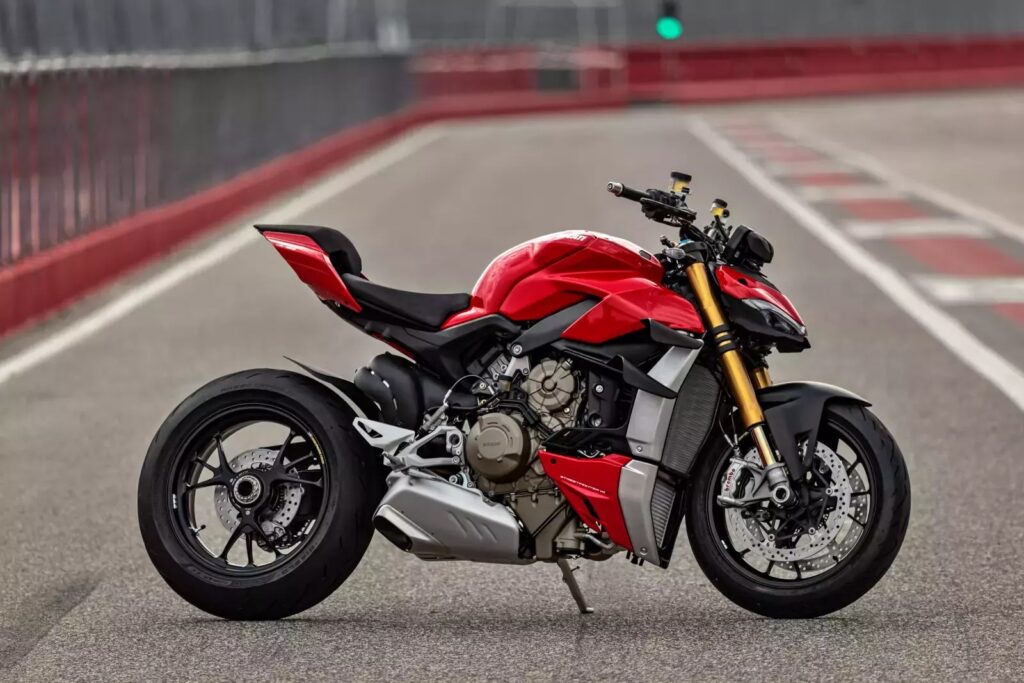 The Ducati Streetfighter V4S is a bike that’s based on the Panigale V4. It’s also the motorcycle that Carlin Dunne rode to his death at the Pikes Peak Hillclimb. Had he finished, he would have set a record.

This, to me, is the best high-powered naked on sale today. It features a 1,103 cc, Desmosedici Stradale 90-degree liquid-cooled V4 engine (204 hp) with a rearward-rotating crankshaft and four Desmodromically actuated valves per cylinder. It’s aggressive and fast and looks straight up wicked. I called it the motorcycle of the year not too long ago, and I stand by that choice. 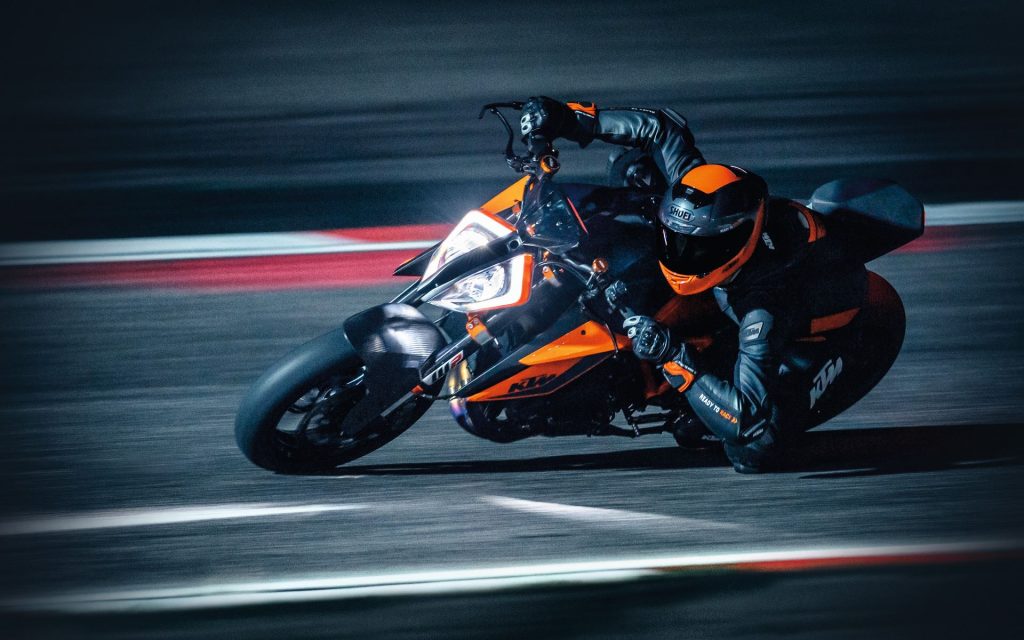 The 2020 KTM 1290 Super Duke R is another extreme machine, that’s a great alternative to the Ducati Streetfighter. The bike is no joke, and while the GT version is geared a little more towards sport touring, the R is a bonafide badass that’s as at home on the track as it is on the street.

Powering the KTM 1290 Super Duke R is a 1,301cc liquid-cooled V-twin engine. It’s powerful (180 hp) and that power is managed through a six-speed transmission. The bike is built to be the pinnacle of the Duke lineup, and it fulfills its mission easily. 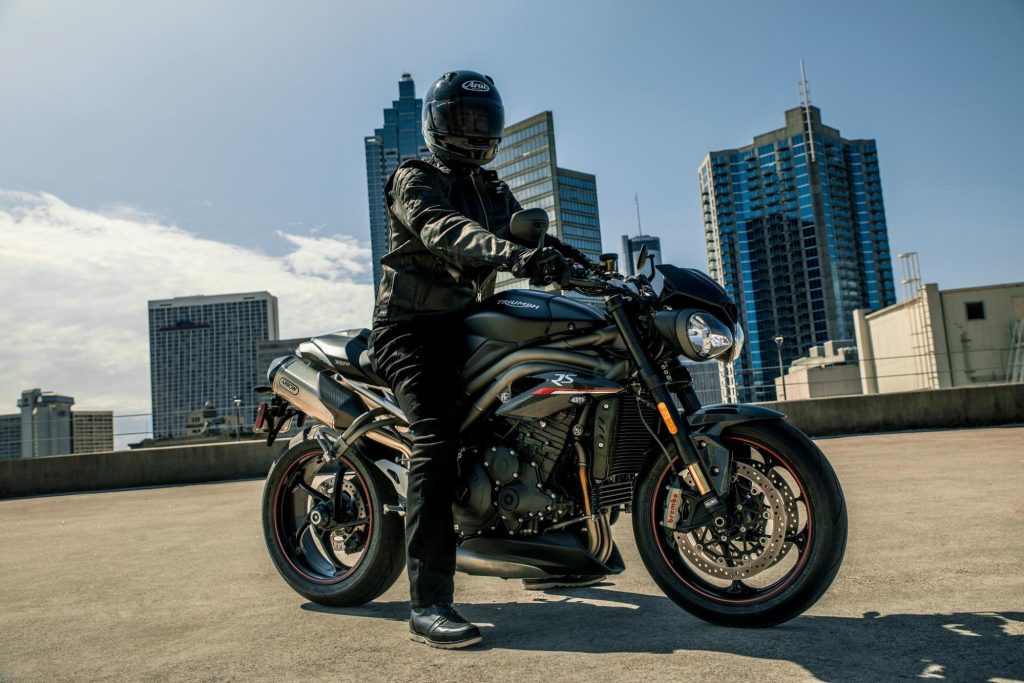 The 2020 Triumph Speed Triple RS is the British answer to the Italians and the Austrians. While it’s not quite as wild as those machines, you’ll be hard-pressed to find a Speed Triple owner who is unhappy with their bike of feels they need something faster.


The post The Best Naked Motorcycles of 2020 appeared first on webBikeWorld.

The Best Touring Motorcycles of 2020

The 2021 Triumph Motorcycle Lineup + Our Take On Each Model

The 2021 Suzuki Motorcycle Lineup + Our Take On Each Model