Lane-splitting, is this allowed?

Just found this: How and Why Motorcycle Lane Splitting is Safe and Good - RideApart - YouTube

It seems the more I read about how to ride bikes safely in heavy traffic, the more I'm becoming aware of motorcyclists in my mirrors. I still drive a Mazda MX5 which, unlike many newer sports cars, does not have a huge blind spot. The good visibility out the back window is one of the many reasons I bought it (I endeavour to drive like a fighter pilot flies - visibility is a matter of life and death). However, there are still some two-wheelers that seem to make stupid mistakes. Yesterday a scooter was lane-splitting while I was waiting for oncoming traffic to turn right. I hadn't seen him yet, but as soon as I pulled away and turned, he kept up with me in my passenger-side blind spot. Still didn't see or hear him. I only happened to notice him when he finally pulled in behind me and appeared in my rear-view mirror. If I for some reason had to take the turn wider than usual I would have run him off the road without knowing it.

I live in California where lane splitting is legal
I do lane split when traffic is less than 31 mph, but I will analyze how wide the lane before I commit.
I see so many young riders lane split at 60 mph+ and weave through traffic I sometimes feel that California needs to revise the law a little bit.
That's just my personal take on this. I know other riders in California will probably hate me for saying this.
D

happy said:
Lane splitting means to move between 2 lanes while moving or while in a traffic slowdown or jamm.
Click to expand...

It was my understanding that "lane splitting" referred to riding in between lanes when cars are moving. "Lane filtering" was the term that I understood referred to the act of filtering-forward at a red-light or other condition when traffic is stopped. If the distinction isn't that clear, I believe it should be. I am not too impressed with lane splitting, but I am completely for lane filtering (following the definition I've given above).

LA_NC700X said:
I believe California is the only state lane splitting is legal... All other states, no!
Click to expand...

I believe CA is the only state where it is explicitly allowed, I think there are a few other states where it is not explicitly forbidden, where you may get cited for "reckless driving" or under some other law, or it may be given a blind eye by police officer who don't have a clear law stating that it is not allowed.

I'm not sure how I feel about the whole lane splitting thing. I have never lived in a state it was authorized. If I did, I’m not sure I would do it. Maybe it isn't as unsafe as it seems. Drivers are so distracted nowadays. They are either talking on the phone (which they still do where it is illegal) or they are texting. I see it daily. When I'm in heavy traffic there is always that one person who has to make there way through the traffic by quickly changing lanes to get a couple inches further. My luck one of those idiots would decide to change lanes as I'm splitting them. I guess I just need to been in that environment to understand it better.

kjang said:
I live in California where lane splitting is legal
I do lane split when traffic is less than 31 mph, but I will analyze how wide the lane before I commit.
I see so many young riders lane split at 60 mph+ and weave through traffic I sometimes feel that California needs to revise the law a little bit.
That's just my personal take on this. I know other riders in California will probably hate me for saying this.
Click to expand...

You can be ticketed in CA for lane splitting at high speed. Whether it's ever happened outside of an accident occurring, I don't know.
As I understand it, there is no law saying that you may or may not split lanes. The CA Highway Patrol (our state police) have issued guidelines for motorcyclists, as given earlier in the thread. There are laws prohibiting a cager from intentionally blocking/swerving at you or opening a door to kill you. Whether that is enforced outside of a cop lane-splitting and almost getting got, also couldn't say. Everything is up to the member of law enforcement who might happen to be there.
There were experiments going in some other states to allow lane splitting, but that may or may not amount to anything.
Last edited: Nov 14, 2013

I hadn't even thought about that. People intentionaly swerve at a motorcyclist lane splitting? It's not surprising but why? Jeez. Another reason I probably wouldn't do it.

I've never had anyone swerve at me, most people are either completely oblivious or will move out of the way a bit (sometimes full on straddling the yellow line, which disturbs me). I have had people edge in to block me while I'm still safely behind them. But my husband is in college, surrounded by punk-*** kids. Getting out of there is a madhouse. Cager's do it because they're jealous that we're moving and they're not, but not jealous enough to do something constructive, like say...trade in their cage. And they don't think about the fact that they aren't just being (insert choice words here), they are trying to KILL someone. It really doesn't happen a lot. We're still safer out of the lane when traffic is crawling along, given the number of rear-end collisions. Just one more reason to keep it slow.
Last edited: Nov 14, 2013

Not legal in Texas. But folks do pass on the shoulder of the roadway quite often, also not legal.

I would be scared to do it because of how poorly people drive up here, and the fact that since it's never been legal, means that it usually freaks the heck out of car drivers, which can lead to bad consequences.

I know I have occasionally slowly "filtered" to the front along with many other bikers who do it when traffic is at a dead stop, but I nearly jumped out of my skin once, when some dude with an unbaffled Suzuki TL1000 twin blasted in between me and the car next to me, while going down the street in my 4X4.

I was all WTF! Holy crap! and I *love* motorcycles.
R

Since I decided to buy a new bike about a month ago, I've watched tons of videos. Many reviews of the NC750X.
It is amazing to me to watch those overseas lane-split. They really are cutting off (taking their spot in line) the car owners and I am amazed that those drivers remain calm and give them room.
I don't think that would work the same in the US. Here in NM you can piss drivers off simply by looking at them and if you made an aggressive move and jumped in front of them it's only a matter of time before you were squashed. Or shot. Or both. JMO.

I have seen lane splitting in California and it works well. The drivers are use to it and as long as the biker is not doing 110 through traffic already going 60 I don't see much problem. I think that speed limits must be observed as well as speed differentials. They have considered it here in AZ and admittedly many drivers are in compete mode all the time but allowing in certain areas where the carpool lane stops daily I see no problem.

In Iowa lane splitting/sharing is not allowed for safety reason. But helmets are not required?!?!?!?
But, I would be more than happy if they will allow me, at the red light, to split between carst to the front. Don't need to split the lanes while cars moving. Now, when at the red light, I don't move forward but "park" on the line between lanes - in case the %$#^%$#$^#^$ driver in the car behind me is checking his phone and don't see me. 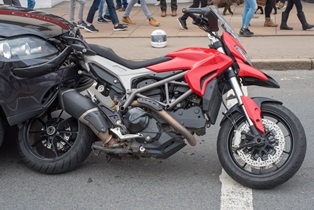 I've watched videos of riders lane-splitting at high speed in stopped traffic. All it takes is one person to open their door & send the rider to the E.R. & total the bike. I wouldn't lane-split if it were legal but if I did I'd go maybe 10 mph max. If you watch lines of stopped traffic you sometimes see at least one person open their door to pour out a drink, flick a booger, whatever. I doubt they check their mirrors first.
Y

About 1980 I rode from my Ohio college to Seattle and down the coast to Los Angeles on a BMW 900RS for a 6 month co-op. As I came into the Los Angeles basin, my first thought was no way can I live with breathing this air. Saw many motorcyclists without helmets and splitting lanes. Thought I would never do that. A couple days later, I didn't notice the pollution any more, no helmet and splitting lanes.

Have to say, I loved it! While the traffic volume was much less then than it is now, it is delightful to be able to always be moving. But I did it at all speeds, to my own self set limit of 75 mph (previously 95 mph standard).

It is not specifically legal in CA, but the position of the CHP is that it is not dangerous and does not need to be ticketed - they do it too. I've never heard of a municipality in CA ticketing lane splitting either. I don't do it here in Ohio because no one would expect it, and I'd get a lot of flack. Tempted sometimes, but the most I will do is a right turn from the shoulder occasionally.

In a mind bending shift, CA now requires helmets despite a strong lobby protest, and Ohio does not. Have to say, I still like riding with no helmet. But I'm extra aware of my mortality for that reason and am cautious. It hurts a lot more to have an accident now than when I was in my twenties.
K

this thread lives, I suppose the moral of the thread is- you don't miss what you never had. At my age if I couldn't split, I wouldn't own a bike. Riding is fun/rewarding largely because I don't have to wait in traffic. Bike insurance cost the same, registration cost the same, maintenance is more and tire cost are through the roof. Having only ridden in Ca., I'de rather not bake in the sun, sitting on top of a hot motor waiting in line with cars
Last edited: Sep 3, 2019
You must log in or register to reply here.
Share:
Facebook Twitter Reddit Pinterest Tumblr WhatsApp Email Link
Top