melensdad said:
North shore of Lake Huron to Manitoulin Island. Then a ferry across Georgian Bay. 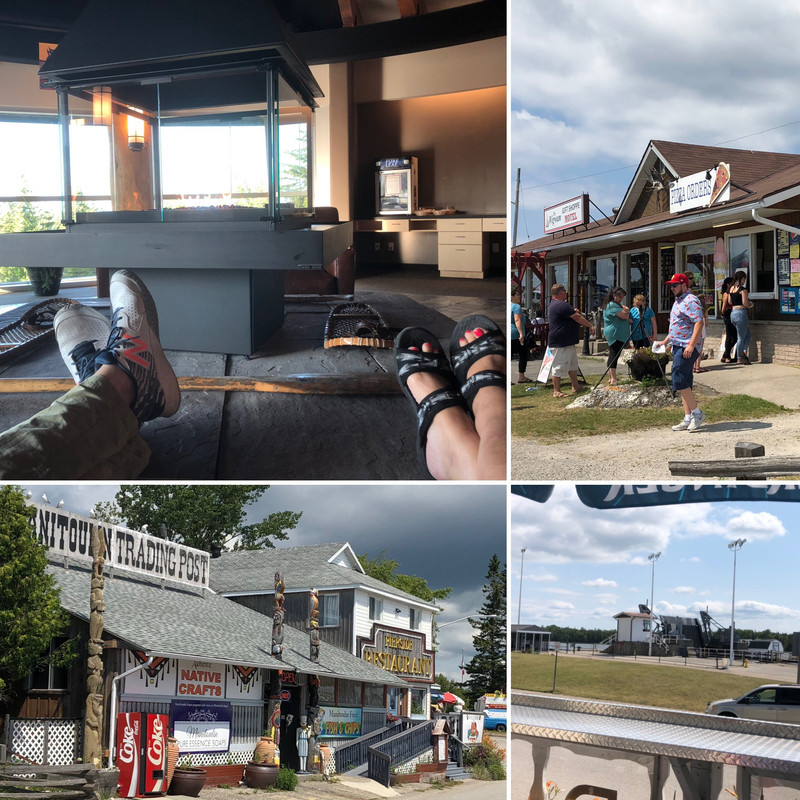 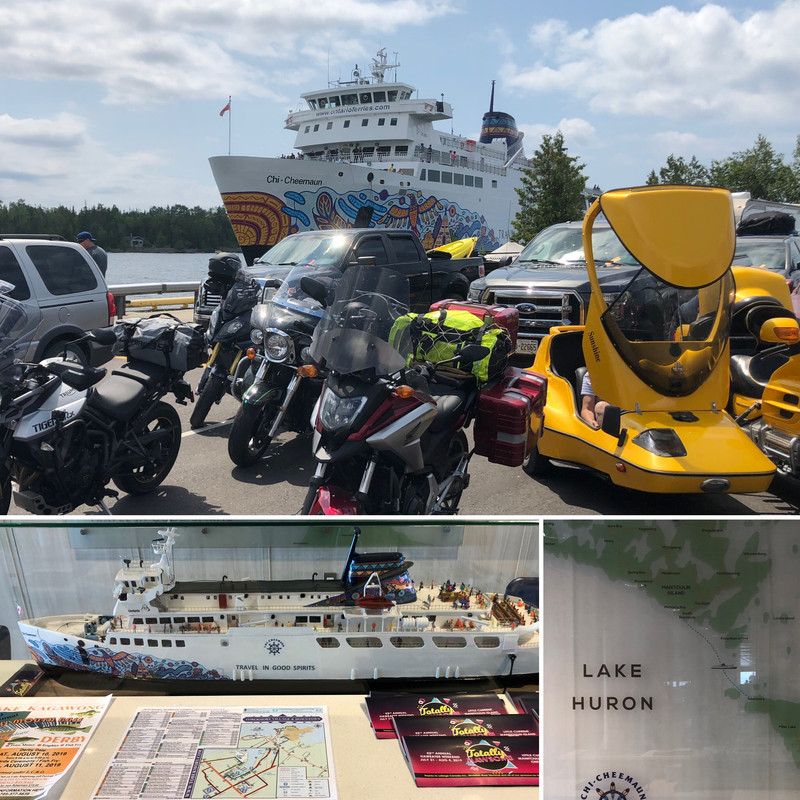 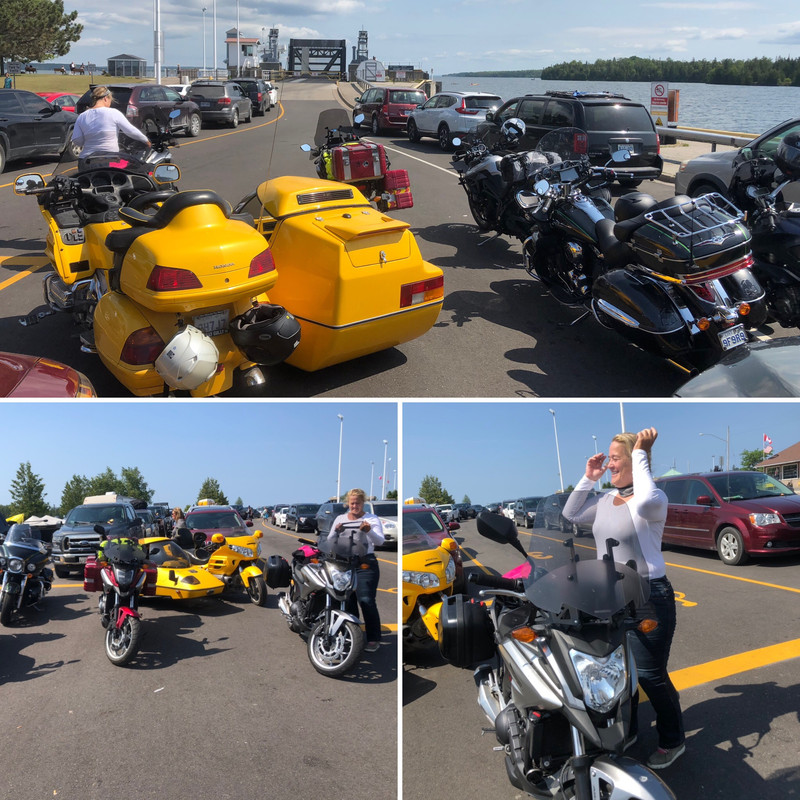 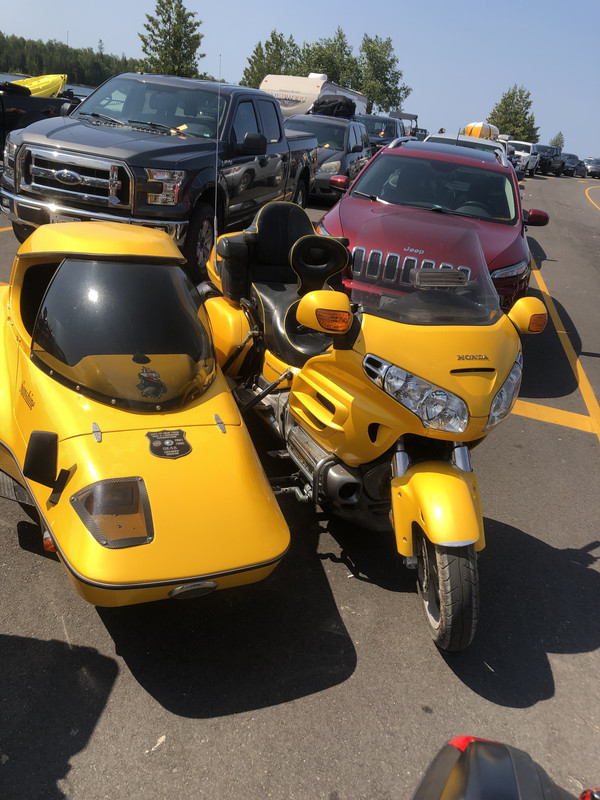 I found this humorous 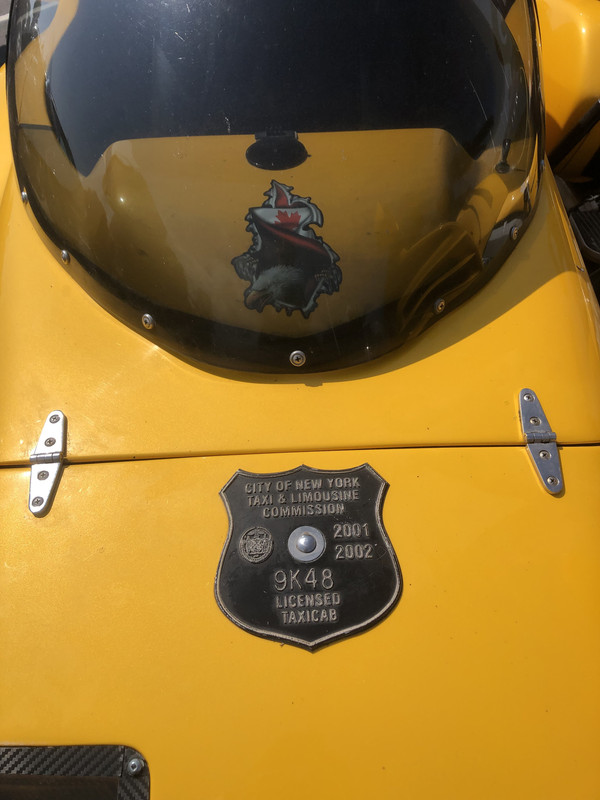 Made it to the south end of Lake Huron and gave up on tent camping so we booked a night at a B&B. It's gotten down into the mid-40's and our sleeping bags, even while wearing 2 wool shirts, wouldn't keep us comfortable. I'm pounding down DayQuil to hold down the coughing. Going to sleep indoors and see if that helps. Scenery is beautiful. Lake Superior is amazing. Lake Huron is just as beautiful and there is nobody living there! Don't pass a gas station without topping up, never quite sure when you will find the next one. 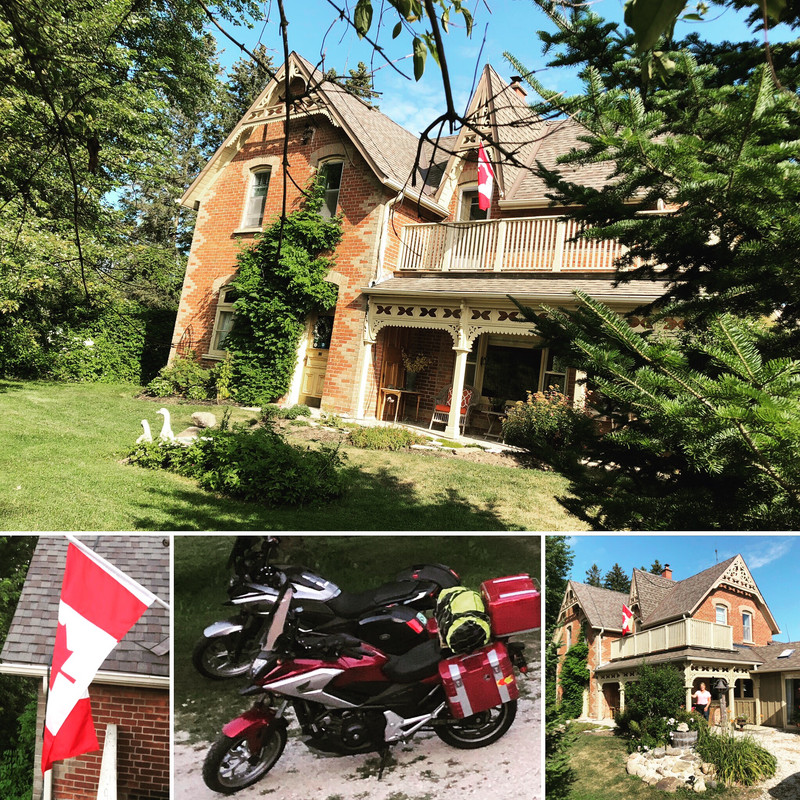 Love the Hannigan rig on the Wing. That's a serious sidecar.

dduelin said:
Love the Hannigan rig on the Wing. That's a serious sidecar.
Click to expand...

Ditto. And with all that yellow plastic, hi-viz clothing is hardly necessary.

Visit site
Back on American soil.

Finished Lake Huron with a night at a rural B&B, then headed south toward (but avoided the city) Toronto & Lake Ontario. Followed the coast of Ontario eastward through several beautiful resort/harbor towns, keeping on roads as close to the water as possible and totally avoiding the highway system. This made travel slow, often 35-45mph. Ended up in Brighton, ON for the night at another B&B. Brighton is about the center point along the north coast line of the lake.

Next day was a fun day. East out of Brighton and onto an island where the only way off was a ferry ride. Then east again, all along the coastal roads to the start of the St Lawrence Seaway. Weather forecast is looking ugly with thunderstorms moving into the area Tuesday/Wed/Thurs so we altered our plans a bit and did not continue northeast up the Seaway. Instead we landed onto another ferry and crossed the seaway to an island. Rode across that island to another ferry point, again loaded up onto a 3rd ferry and crossed into US waters. Landed at Cape Vincent, NY which is very near the start of the St Lawrence Seaway on the northwestern tip of Lake Ontario. Lovely late-lunch at a brew-pub after chatting with the border agents about the rowdy Canadian couple behind us on their HD Actually they were very nice, he's actually a Honda guy who just got a HD for a trip. They just started their trip into the US the same day and we were on 2 of the 3 ferry crossings with them.

From Cape Vincent we did our best to follow the southern shore of Lake Ontario through the small towns. Turned south and pulled into the Del Lago Indian Casino/Resort for the night. We plan to stay for 2 nights. I thought my lovely wife was going weep when they handed her a glass of champaign upon checking into a king room. It has REAL American style A/C that actually is quiet AND gets the room cold. It was like heaven. This is where we will recharge our bodies a bit and, hopefully watch the storm pass? A luxury resort is a huge change over from tiny motorcourts, B&Bs and campsites. I think its a good change too!

We may try to make it to Niagara Falls tomorrow, but that is storm dependent. Not going to take the lovely Mrs_Bob on the roadways during heavy thunderstorms. These bikes are capable but that is just no fun for anyone. Best to sit it out and ride when there are breaks in the weather. We have had nearly perfect weather on this entire trip, no need to push ourselves during the last week when we are already road weary. 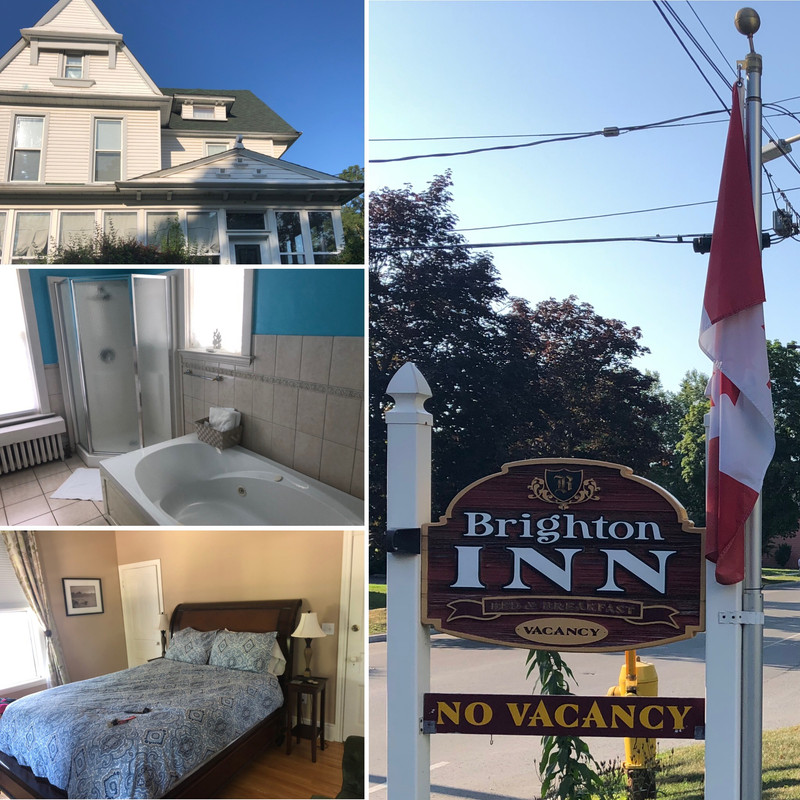 And the many ferry crossings . . . 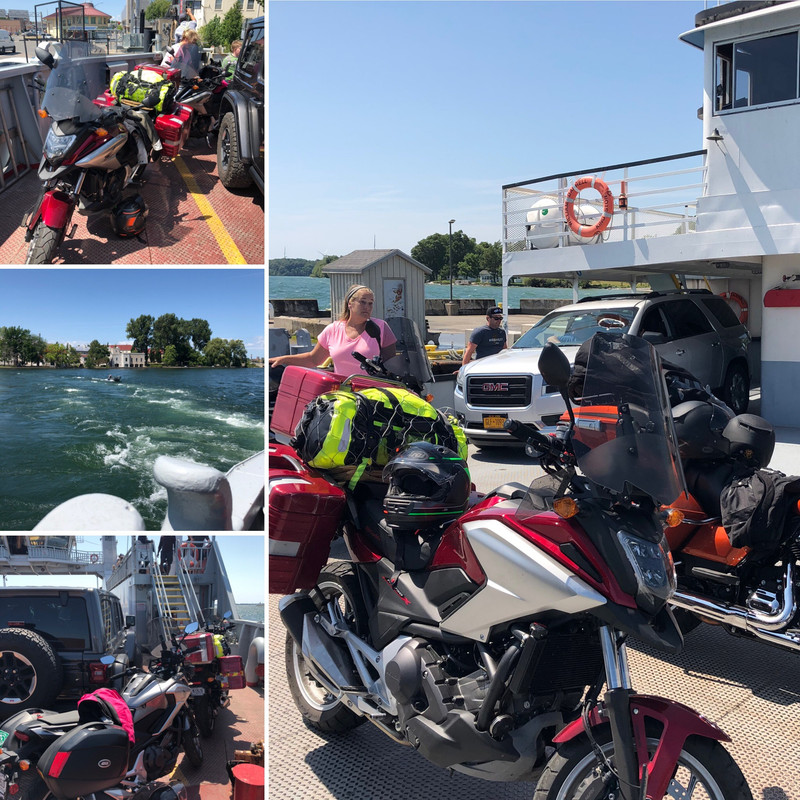 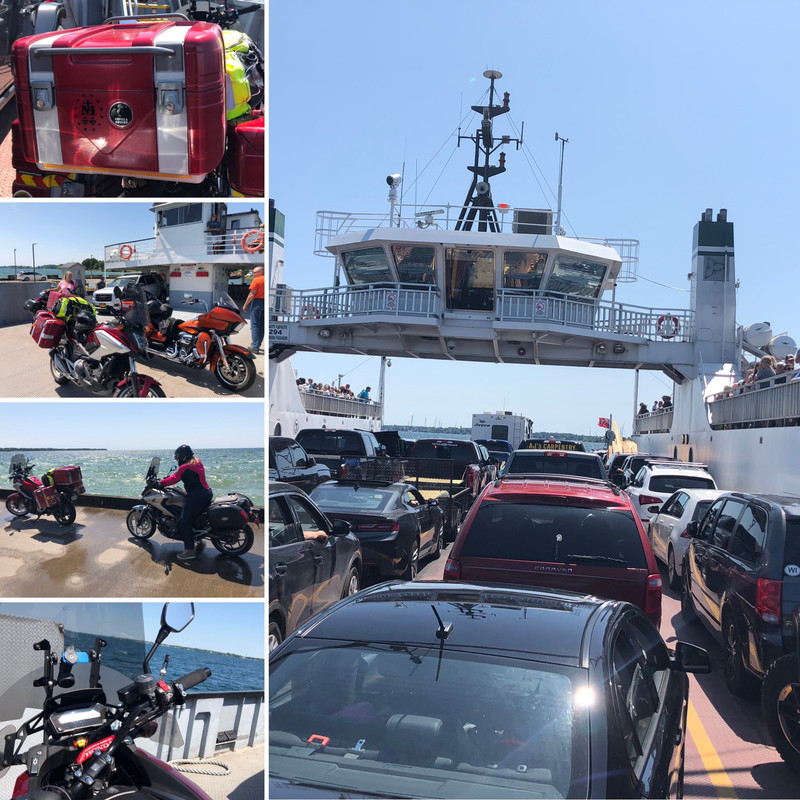 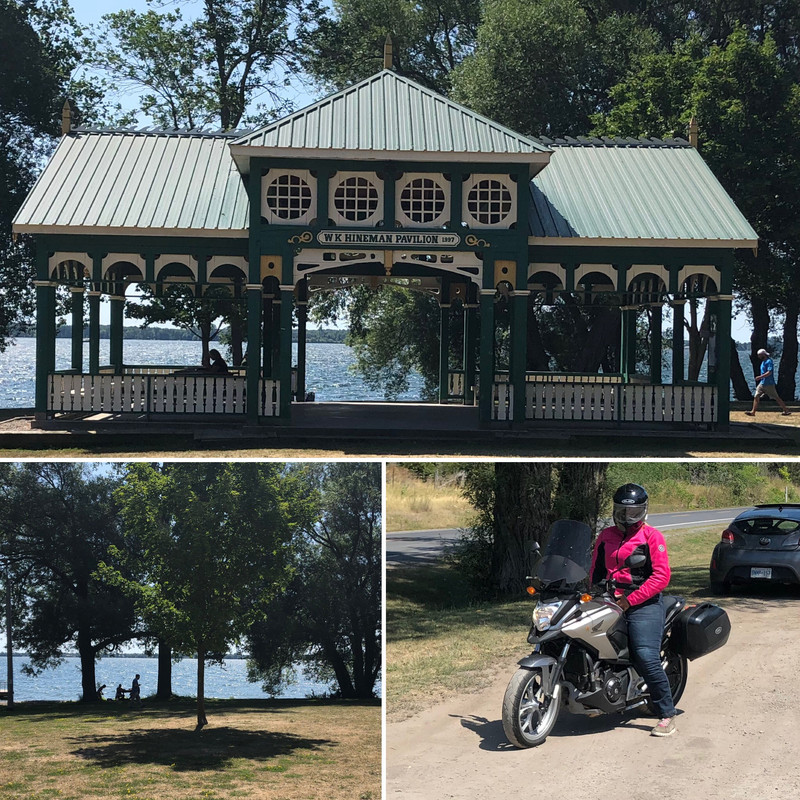 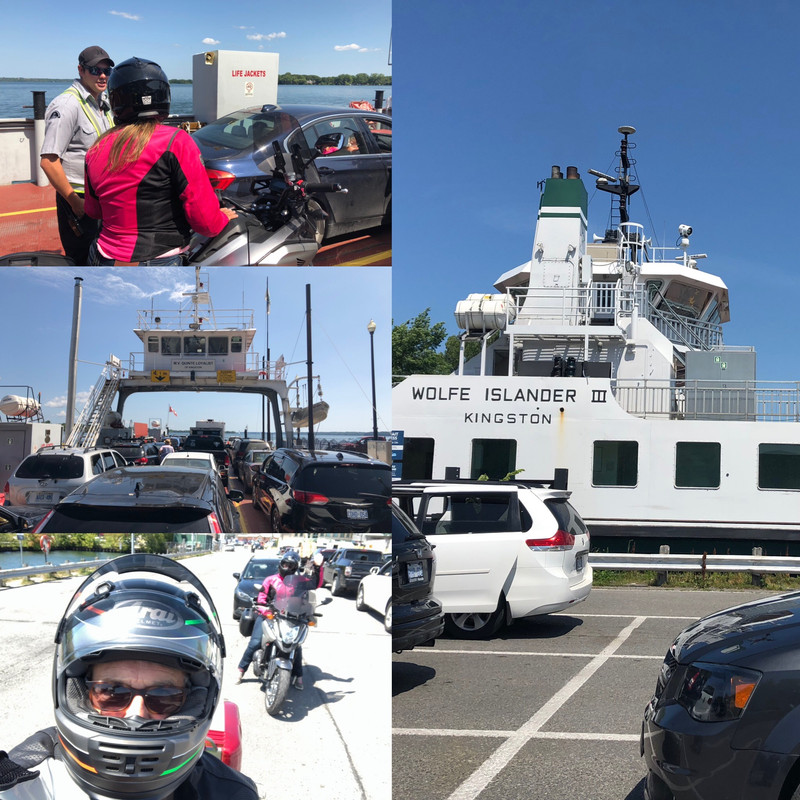 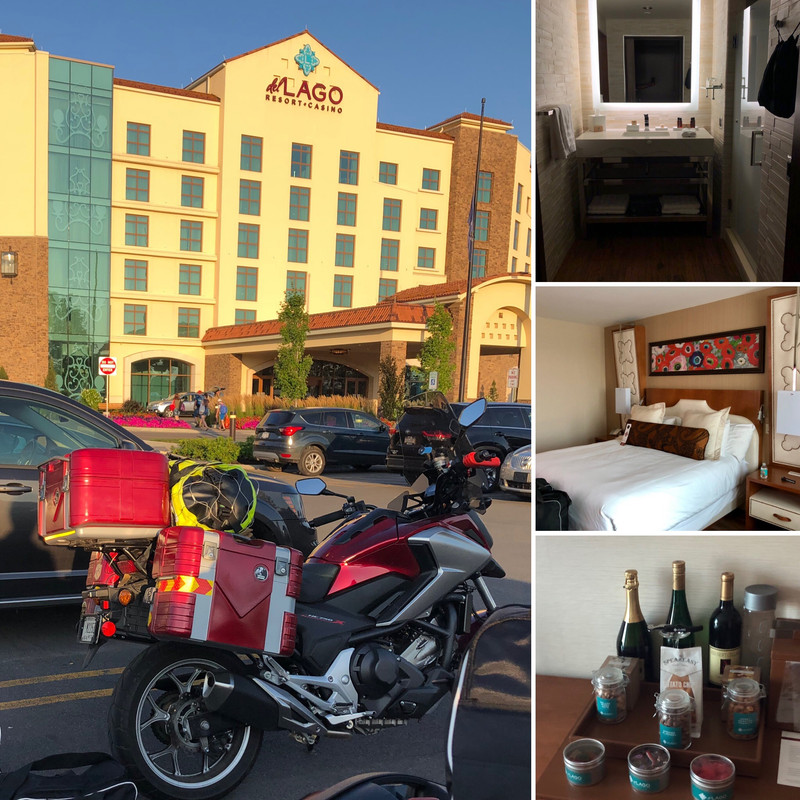 Visit site
Be safe....looks like you guys are having fun...

Visit site
Back on the backroads again :clap:

We left the casino, having only lost $0.95 in the slot machines. Played a buck. Could have left with $0.05 but donated that to the NY Humane Society. Odd that the slot machines don't accept coins anymore. Credit, Debit or bills but no coins. Clearly I am not a gambler. Nor is the lovely Mrs_Bob.

Currently on the shore of Lake Erie just outside of Dunkirk, NY.

Tomorrow we should be outside of Cleveland, OH.

Lovely hills and roads in western NY for riding. All 2 lanes through small towns. Stopped in a little cafe for a late breakfast. Got off the bikes a few times to walk around in some of the towns. Nothing much to really see, most are cute towns but clearly decaying and losing population. A few are bucking that trend, but not many. Minimal staffing at stores I’ve been to, minimum wage is over $11/hr in the state and small town stores can’t afford the labor costs. 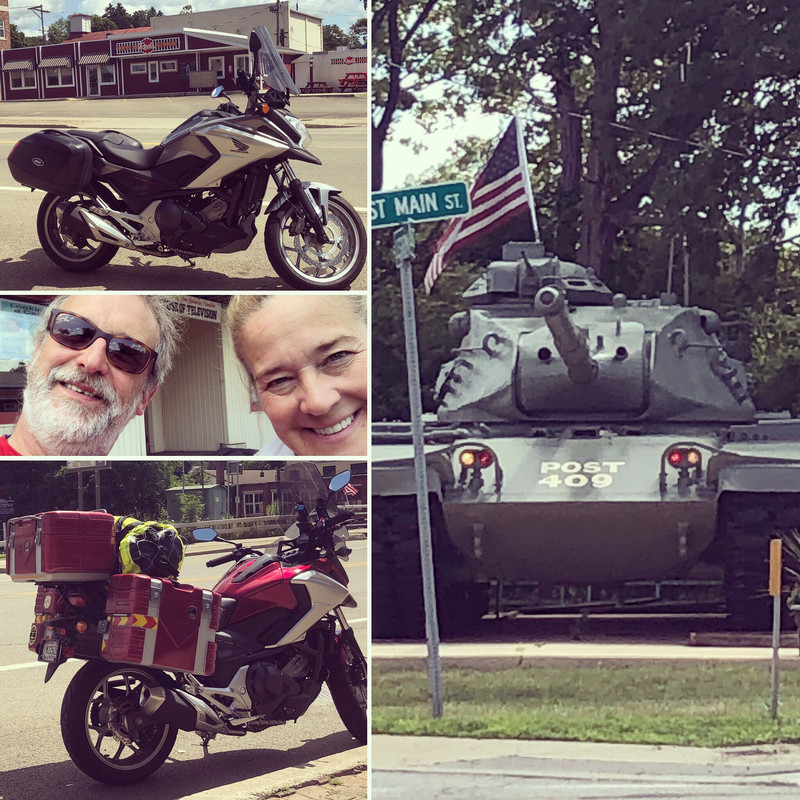 
We are home. Final leg was a 200 mile stretch across Indiana back home. Departed Defiance, OH about 7am and rode under cloudy skies most of the way home on rural roads. Stopped in Spencerville, IN to see the old covered bridge. Made a few other shorter stops along the route for food and fuel.

About 40 miles from home the rain started so we ducked for cover under a bank drive-thru canopy. I was in a bit too much of a hurry, turned a bit tight and hit my plastic Hepco & Becker side case on the brick pillar that holds up the drive-thru canopy. As I predicted the case easy took the impact. Bounced the back end of my bike but other than a very minor scratch, the case did not deform. Honestly I believe that if I had done the same thing with an aluminum case I'd have a nice, permanent dent in the case. Really happy with these cases, I can see why KTM uses the H&B Gobi plastic cases as their OEM panniers.

Rain let up, we saw a break in the sky so we headed back out to try to get home. Crossed into the next county and the rain started up in earnest again just as we pulled into the little town of DeMotte, IN. Saw a 3 bay car wash and pulled in for shelter. 20 minutes later the rain was down to a drizzle and we headed back out toward home. By the time we crossed the county line into our home county the rain was more of a light mist. 25 miles to go and the sky was looking brighter. When we arrived home the roads were almost dry under the mostly sunny sky.

Overall not too bad, we were gone for almost a month and got wet on our last day. We did hunker down in an Indian Casino in upstate NY for a couple nights to avoid a big storm but managed not to get wet exept for when we ventured out to visit a local eatery, and even then we only got drizzled on for about 2 miles during our return trip from the diner to the casino. Can't say we didn't have great weather for the trip. 90% of the days were sunny and warm. We got cold camping a couple nights, one night in particular we were very cold. But we switched to small roadside motels and a few B&Bs for hot showers and warm blankets.

Ran a few more miles on gravel roads than I had planned. The lovely Mrs Bob is not thrilled with riding gravel. She seemed extra nervous on the gravel on this trip. We have gravel roads near our home and she has never complained, but on this trip she seemed very uncertain about the gravel. Perhaps there was the conscious knowledge that if she somehow broke the bike on a gravel road she was much farther away from help?

4000 miles on this trip and only 7 of those miles were on the interstate highway system. The vast majority were on 2 lane roads. Where we had 4 lanes (or more) we were typically transiting cities in urban traffic. We intentionally stayed off of limited access roads and looked for county roadways that took us through small towns. We found real people, the people and towns who are bypassed by the highways. We had real conversations, and realized how friendly strangers are if you just sit down and talk to them.

Visit site
Thanks for sharing your trip with us.

Visit site
That was long time on the road. Nice to be able to do it with your best friend and partner

Visit site
And some final photos.

Some regrets, didn't get to see Niagara Falls due to weather fronts moving through the area. I suppose we could have but it would have added more time to the trip and we were both sick with head colds. According to my doctor, who I visited after getting home, in addition to sinusitis I apparently I have an ear infection too. So we were not motivated to stay on the road much longer. We did not stop at all the historic lighthouses. I wish I had mapped them better. It would have made for a better trip if I had planned a few of those short visits better than I did. In many cases we rode right past the signs leading up the road to those at 45-50mph and didn't realize we passed them.

Lake Superior's Circle Route is well marked. Lake Erie's Circle Route and Coastal Trail are well marked. The Great Lakes Seaway Trail is marked in New York, PA and Ohio. Lake Ontario and Lake Huron Circle Route signs were pretty much non-existent? Then again, in some areas we were off the quasi-official routes and on the smaller roads riding the lakeshores and through some of the small towns. I notices signs, especially along the Lake Michigan route that directed people onto busier roads away from the lake.

So clearly we followed our own path, preferring to skip some of the official roads. We did not do a full circle route of the Great Lakes. We did our modified version, riding at least 1 full shoreline of each and circling just Lakes Superior and Ontario. Caught part of the St Lawrence Seaway Trail as well, but did not travel its full length north on the Canadian shore and then back south on the US side.

Happy with what we did, no regrets about not doing the 'full' circle.

Not sure what is next for us as far a big adventures go, but probably returning to long distance back packing and doing a north to south trip of Italy? In the mean time there will be plenty of local and midwest US rides for us, as well as returning to 'normal' life. 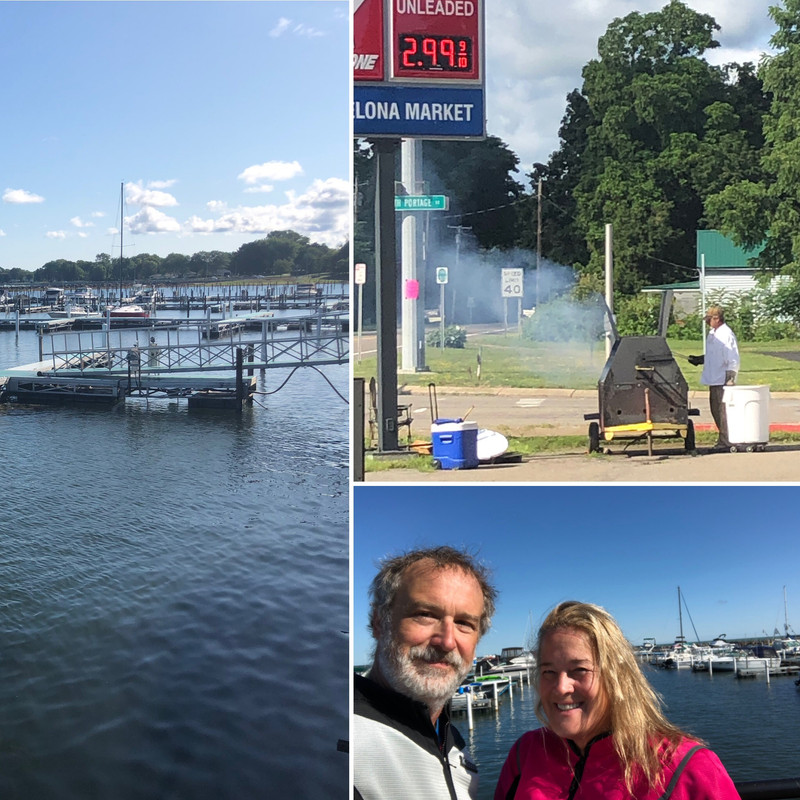 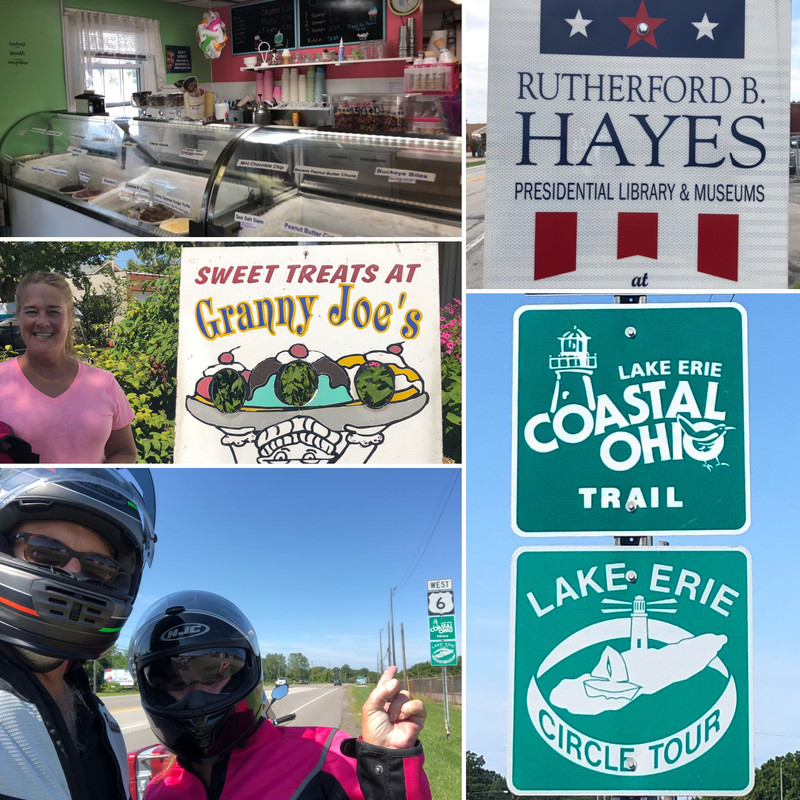 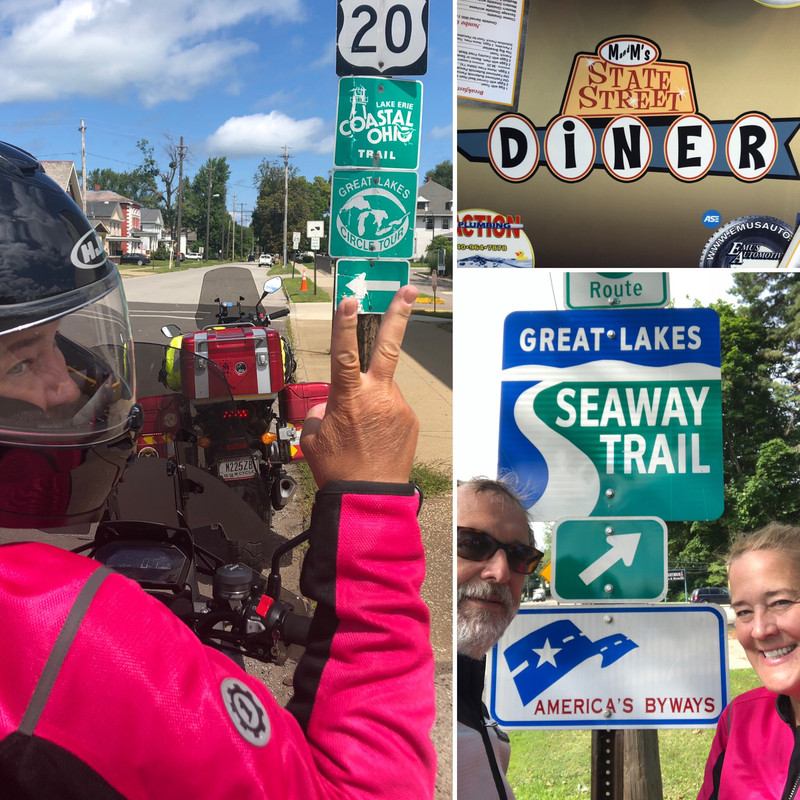 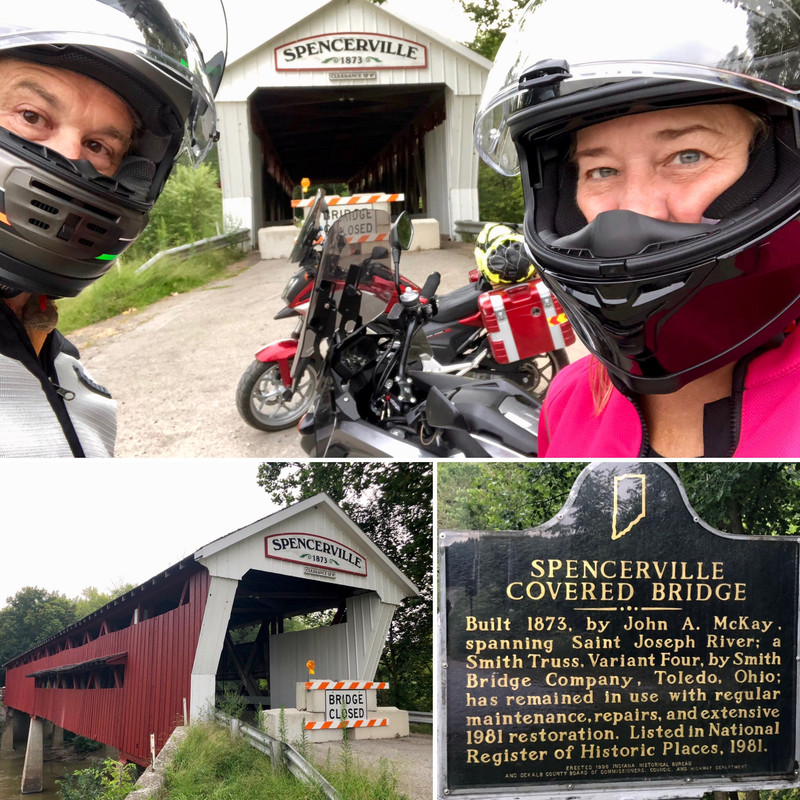 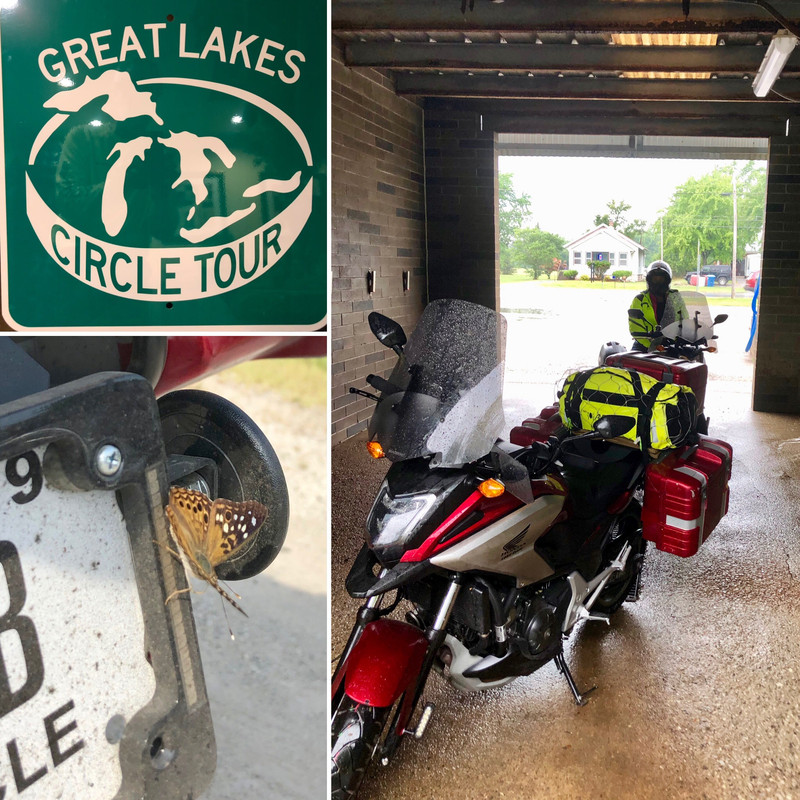 The Fastest Street Motorcycles Ever Made