So I have been putting this off for a while now and decided to start to strip down my forks and replace the leaky seals when I ran across this tool made by promotion called a seal mate.
I decided to try it but I was not going to pay 8 bucks for a flimsy peace of plastic and not be sure if it was going to work so I scoured the house and realized I have a old plastic cutting board sheet so I cut it in the shape of the tool and followed the instructions on how to use it and it worked cost me nothing. So here it is. It actually took a lot of crap out of my seals when I was done cleaning i was very surprised this worked took a couple of compressions of the front forks to re seat the lip of the seals as the instructions say and just like that the tubes came clean no more oil leak. Just wanted to pass this along as one thing to try before replacing the seals. It seams to work as advertised but no need to buy the tool I can even still use the cutting board because I just cut out a small section in the corner. Just YouTube the directions on how to use the seal mate.
Funny I just took my Africa twin in for leaking fork seals under warranty although I would never pay for this job and just do it my self the cost to do the repair would have cost me 800.00 YIKES!!!! This tool probably would have worked but I didn't know about it. 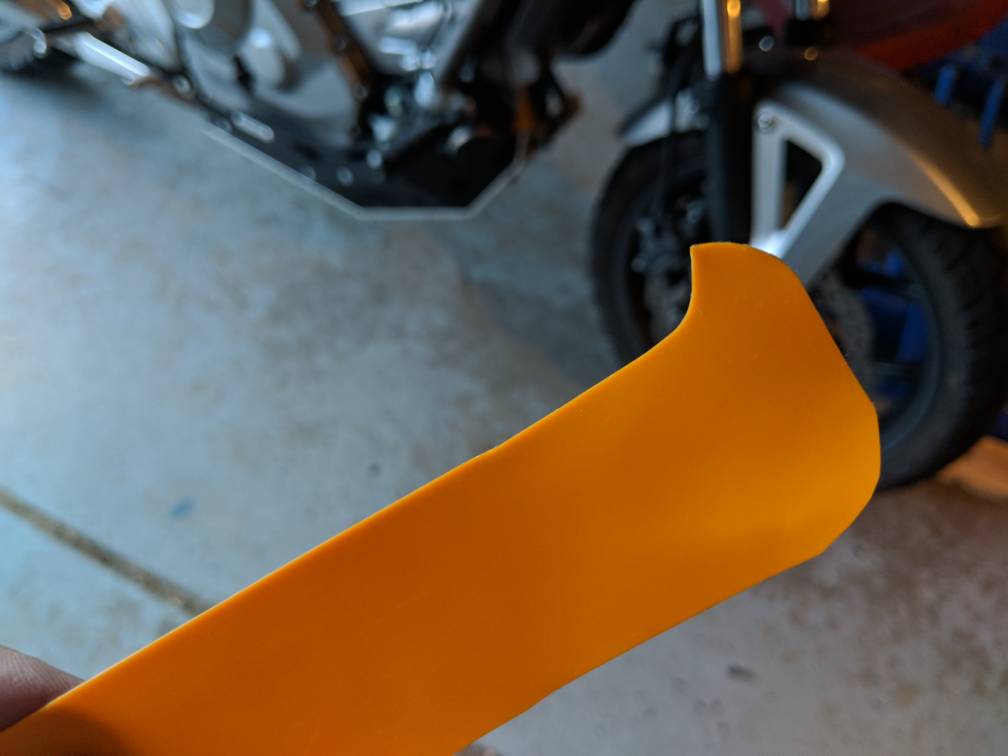 I did the same thing and made mine out of a plastic milk jug.
M

potter0o said:
I did the same thing and made mine out of a plastic milk jug.
Click to expand...

Cool. Yeah never really new of such a tool until I was shopping for some new seals I would always just replace them before on my other bikes I apologize if this is old news for some but I posted it because somewhere I ran into a post from late last year of someone wanting suggestions if there was a easy way to stop you fork seals from leaking and no such tool was mentioned.

I personally didn't think this was going to work at all and was sceptical but it did let's see how long it last because I have never had my forks leak again after replacing the seals and am a little dumbfounded as to why these were leaking in the first place. Probably cheap crappy seals to begin with as I have taken very good care of the fork tubes.

They stated leaking last summer and I would always just wipe them down putting replacement off. now I have to service the fluid because levels are probably jacked but a little less work now that I don't have to do the seals so it's all good.

I saw the job of doing the fork seal a bit daunting. I read some stuff about this as an option and it made sense from starting with the least invasive method. It was a cheap and successful fix so I have not had to learn how do the fork seals I thinks it's a great post especially if it helps another person who didn't know.

had a small leak on the fork seal area. Oil seeping down on to the garage floor.
I cut out a small plastic container and made a small hand tool out of it.
I inserted the tip of the tool onto the chrome fork and worked my way around it.
cleaned it off and did it again. Then i compress the forks by getting on to the bike and using my weight forced the front fork to compress. Did this for about 10 compressions. Then went on a ride.
After that, no more leaks.

Just make sure that you leave no sharp edges on the tool.
B

You can cut one out of a credit card too. Doing that on dirt bike seals for years. You can load waterproof grease behind the dust seals to this acts like a barrior. Check the fork sliders for nicks with you fingernail. That will damage a deal in short order. If any is felt wet sand with 320 to 2000 grit. They smooth out fine.
You must log in or register to reply here.
Share:
Facebook Twitter Reddit Pinterest Tumblr WhatsApp Email Link
Top